Welcome to the beginnings of a site about Fox Studios in Century City just to the west of Beverly Hills.
Founded in 1935, as the result of a merger between Fox Film Corporation and Twentieth Century Pictures, Fox is now a subsidiary of News Corporation. 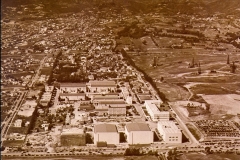 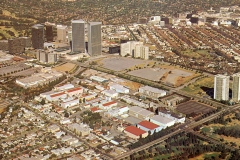 Building 1
This building was originally the Executive Building (before the new HQ building was constructed) and is now known as the Bochco Building, named after Steven Bochco (creator, exec.producer & writer of NYPD Blue and Doogie Howser M.D. amongst others)

Building 29
Used for post-production, this complex of facilities was originally Stages 3 and 4.

Building 41
This is the oldest building on the lot, and was originally the stables for Tom Mix’s horses.
Before the studio was constructed, the whole area was dirt / grass, with the stable block in the middle of it, and Tom Mix’s house in the corner.

Building 80 The Old Writers’ Building
The building was featured in various movies and TV shows.
It features as a restaurant exterior in X Files (episode En Ami).
Steven Bochco had an office in the building, along with many other writers working on Fox TV shows.

Building 86 The Stars Building
This building used to house offices for Fred Astaire and Tyrone Power, and the room with the circular window on the ground floor was Marilyn Monroe’s dressing room.
The building has appeared regularly in Charlie’s Angels, as well as Peyton Place, X Files etc.

Commissary
The Commissary at Fox Studios is believed to be the oldest unchanged studio commissary still in existence.
It was originally called the Cafe de Paris as it was built on the site of one of the semi-permanent sets, a French restaurant.
The star-studded mural featuring Janet Gaynor, Warner Baxter and Will Rogers was unveiled in 1935 and can still be seen to this day. Shirley Temple was added to the design a few years later. The art deco style of the building is delightful.
The original studio layout had a circular driveway leading to the commissary. When Darryl F. Zanuck took over the studio in 1935, he brought his own chef with him, who formerly ran a deli in New York.
Although the commissary is not open to the public, it has been seen in many Fox movies and TV shows over the years.