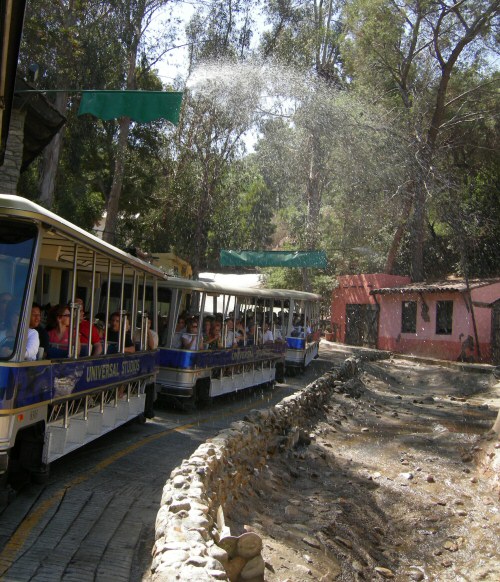 After coming down the hill from the Transportation Department and Jurassic Park prop display, the tram pauses next to a winding street running through a Mexican village. The tour guide demonstrates a movie “rain” effect involving rain bars which direct a spray of water upwards which then falls looking like rain. The tour guide then demonstrates a thunderstorm effect using powerful strobe lighting and thunder sound effects. The rain won’t turn off – sometimes too much rain causes flooding – wait! What’s that at the top of the hill? A wall of water rushes down the hill and threatens to engulf the tram. A wooden cart swings perilously close to the tram and a signpost is thrown over by the force of the flood water. Then, just as the tram drives off, the water drains off the set and is pumped back to the dump tanks ready for the next tram to pass.

The effect was added to the tour in 1968 and has appeared in countless films including Big Fat Liar and Fletch Lives.

Guides commonly use two “gags” in this area: Early film-makers realised that pure Californian water doesn’t show up well on film, so they added powdered milk to the water to make it more visible. Gene Kelly wasn’t really “Singing in the Rain” – he was singing in the milk!! (the story is true – only the punchline is cheesy!). The other gag is about the fact that the water is not wasted – it’s all recycled… right up through the drinking fountains around the upper lot. (The water is reused and is pumped back into the tanks ready for the next tram to visit.)

Following the flood, the tram drives off through Mexican Street / Old Mexico towards Six Points Texas. 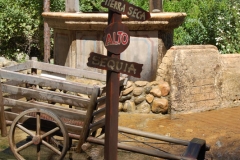 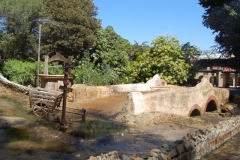 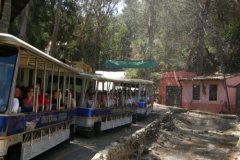 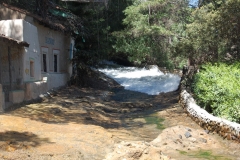 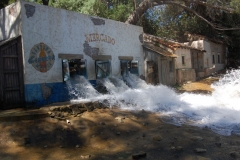 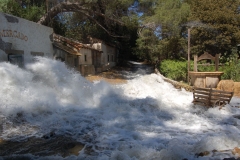 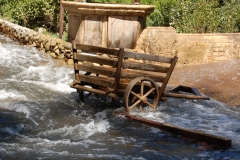 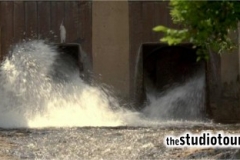 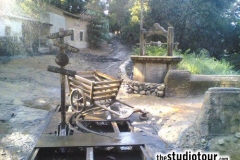 How Does It Work?

In the early days of the attraction there was a tree that was knocked over by the flood. That was replaced by the current signpost and cart. 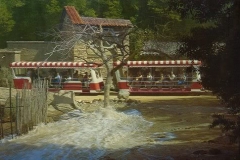 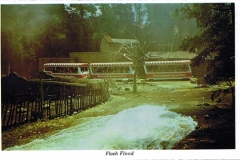 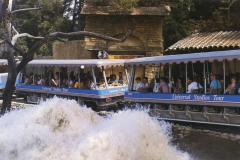 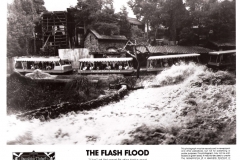 From sun to storm in a matter of moments.
As you go down a sleepy Mexican village road, the weather suddenly takes a turn for the worse. There’s a warning thunderclap, followed by a tropical downpour. Before you can react, a tree overhead cracks and up the road a wall of water rushes towards you in a monstrous wave. The tree is uprouted and the flash flood threatens to swamp the tram. At the last moment, the flood waters are diverted and the tree miraculously rights itself. You’ve just survived our menacingly realistic Flood effect – 20,000 gallons of water released from huge storage tanks high above the hill. The water rushes down the cobblestone road only to be recycled back into the tanks. A quiet sunny village has been turned into a rainswept disaster area and then back to its original tranquility in a matter of moments. If you look closely, you may even see a rainbow. The flood is a tribute to the ingenuity of Universal’s Special Effects Department.

‘It never rains in Southern California but it ‘rains’ every day in this sleepy Mexican village, the location for such movies and TV shows as ‘Butch Cassidy and the Sundance Kid’ and ‘Simon and Simon’. And when it rains movie-style, it pours on this set, causing a raging flash flood that barely misses your tram. Of course, we recycle the water to the reservoir above, ready for the next group of unsuspecting visitors.

There’s a story that when a group of dignitaries (including John Wayne) visited the Flash Flood in the early days, the water pressure was still being perfected, and the group got soaked.

A real-life storm affected the area when a tree was uprooted and crashed through the set in July 2009. 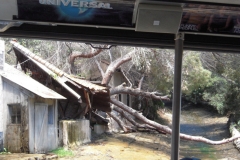 Press Release, April 2006:
“Flash Flood,” which simulates the wrath of Mother Nature during a torrential down pour — pelting the tram with “movie rain” and culminating in a devastating flash flood visual effect– will become an even wetter experience as thousands of gallons of water are added to heighten the drama. And who better than to introduce this meteorological marvel than the Today Show’s popular weatherman, Al Roker, who will provide a video cue for the deluge.
Universal Studios Hollywood Press Release, April 2006