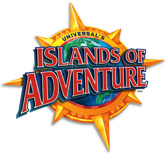 From Universal Orlando website, 2017:
With the help of an archeologist guide, you’ll venture through the darkened ruins of the ancient Temple of Poseidon, Greek god of the sea. But once you’ve journeyed far beneath the ocean, you’ll find it’s too late to turn back.Feel the fury as you’re caught in a colossal battle between Poseidon and the evil Lord Darkenon. Fireballs burst, lasers flash, and water erupts around you in this spectacular special effects experience. Will you make it back to the surface before the temple comes crashing down?

This classic immersive attraction is a masterpiece of theming, combining innovative projection onto water-screens, along with highly detailed sets, spooky atmosphere and seemingly impossible transformations.

The attraction has been remade (at least) twice since it’s debut in 1999.

40 feet long, 18 feet in diameter tube which has 40 water nozzles projecting water at speeds around 90-100 miles per hour up and around the tube, to create a tube of water through which guests walk to make their transition from the land to the sea.

The patent for transformation effect which instantly transports the audience from the undersea world (where the main movie / presentation takes place) back to the small enclosed room where the attraction started can be viewed at Google Patents.