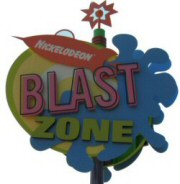 This interactive area opened in April 2001 and was closed on January 7 2008 for complete rebranding.
By 19 February 2008 the dry area was open and had been rethemed as The Adventures of Curious George.
This attraction closed in September 2013 to make way for The Wizarding World of Harry Potter. 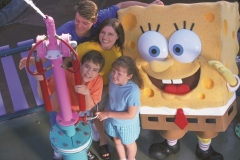 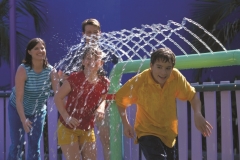 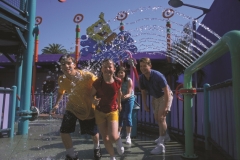 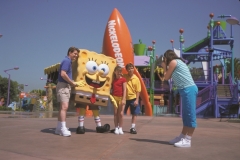 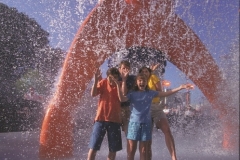 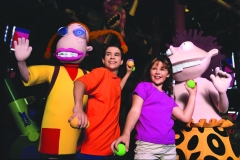 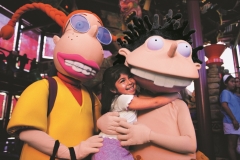 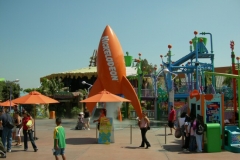 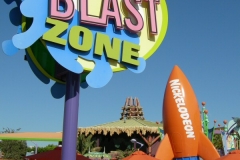 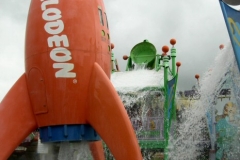 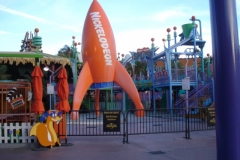 The play area replaced the Warlord Tower and a water feature. After Fievel’s Playland was closed in 1997, the Upper Lot was without a childrens play area, so it was much needed.

Dora the Explorer and Diego were often found around the Blast Zone, along with Spongebob Squarepants nearby.
The Rugrats Magic Adventure was a live stage show, which was later replaced by the Shrek 4D attraction.

The Wild Thornberry’s Adventure Temple is a great (dry) play area for kids who want to avoid the wetter attractions of the Blast Zone.

Flying foam rubber balls and thousands of gallons of splashing water will be among the elements offering unlimited fun as Universal Studios Hollywood teams with Nickelodeon to create the all-new “Nickelodeon Blast Zone,” bringing the critically acclaimed and wildly popular children’s animated television programs to life in an imaginative 30,000 square-foot interactive adventure opening in April, 2001.
The innovative, immersive attraction — California’s largest Nickelodeon-themed adventure zone — is designed to allow the entire family to play together in an eye-catching environment that brings a new dimension of magic, fantasy and fun to the world’s biggest movie studio and theme park.
Within the parameters of “Nickelodeon Blast Zone” immense 30,000 square-feet — the size equivalent to a jumbo jet airplane hanger — guests will find a series of distinct areas, uniquely themed with special kid-friendly activities. Located within an ornate thatched jungle house adorned with Asian rain forest motifs, guests will discover “Wild Thornberry’s Adventure Temple,” a rough-n-tumble ball play arena comprised of more than 25,000 molten lava-colored foam balls. Deep within the temple’s interior, kids of all ages will come face to face with an enormous and mysterious orangutan statue, which, when provoked, will hurl exploding balls in all directions. Or, they might stumble upon the Temple’s sacred Alter where they can shower the entire enclosure-and unsuspecting guests-with dozens and dozens of multi-colored balls.
“Nickelodeon Splash!” will feature the zany characters from “Sponge Bob Square Pants,” “Angry Beavers” and “Rocket Power” located within an elaborate water play area. Created for kids of all ages, adults will also enjoy romping with their children on a platform 25 feet above ground as they exchange water blasts from H20 target streamers. They’ll dodge the deluge of two, 500-gallon water buckets that will shower bystanders with over 12,000 gallons of water per hour — enough to fill a 20’x30′ swimming pool — or, they can watch from the safety of a conveniently located “dry zone.”
On the ground level of “Nickelodeon Splash!,” kids can traverse a thoroughfare of water devices ranging from wildly splashing hoses and geysers spewing 30′ plumes. The surge of water continues at the towering 30′ tall orange Nickelodeon rocket, which unleashes more than 12,000 gallons of water per hour from several H20 blasting engines.
Within the “Nick Jr. Backyard” interactive play area for younger children, kids under the age of six can frolic on a variety of slides, cargo nets and a slide-for-life pole. A bank of 20 water pop jets will project fancifully patterned sprays reaching several feet above the ground. Other imaginative equipment will enable kids to slide, crawl and climb, under, over, onto and into the engaging world of “Blue’s Clues,” “Little Bear” and “Dora the Explorer.”
The “Rugrats Magic Adventure!” — a fanciful 20-minute stage performance of music, magic and mayhem — will also be a featured attraction of the “Nickelodeon Blast Zone,” launching guests into the imaginary world of Angelica, Tommy, Chuckie, Phil and Lil. Taking its cue from the “Rugrats” episode, Angelica the Magnificent, the “Rugrats Magic Adventure” invites guests into the animated series where they participate in Rugrats-style pandemonium. The action begins with a wave of Angelica’s Wee Wizard Wand as she tries to realize her dream of becoming a world-famous magician.