Land of a Thousand Faces

aka The Show Of A Thousand Faces

Following the success of the make-up show in the small Glamour Pavilion (capacity around 100 people), Nick Marcelino, head of make-up at the studio was approached by Jay Stein and Terry Winnick to come up with a more elaborate show. He suggested that his friend Verne Langdon could create a show which could play to a larger audience up to 10 times per day. The stunt show was moved to a new venue, and the 1500-seat outdoor arena was prepared for The Land of a Thousand Faces show. As this was an open-air arena, the sets and props had to be securely fixed down so they didn’t get dislodged during strong winds. 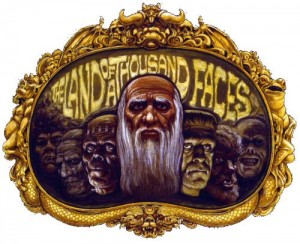 Souvenir poster from the show. Art work by Ron Cobb depicting ‘The Spirit of the Mirror’ (center), who spoke in the voice of Senior Thespian John Carradine (with pipe organ score by Verne Langdon) about the great movie character makeup of the past, as the face of ‘The Spirit’ dissolved into each makeup he described!

The arena was built up to form the new Castle Theatre just after the end of this shows run for an even more elaborate make-up based show – Castle Dracula.

The show began with “The Spirit Of The Mirror” (show host in “Spirit” makeup) reminiscing about the great screen makeups of the past, including Lon Chaney’s Phantom Of The Opera, followed by Charles Laughton’s portrayal of Quasimodo, The Hunchback Of Notre Dame, plus the Wizard Of Ozcharacters The Lion, The Scarecrow, and the Tin Woodsman. As each famed makeup and it’s artist-creator were mentioned, the faces morphed one into the other. The pre-recorded voice of “The Spirit” was character actor John Carradine, speaking lines written by Verne Langdon, to Theatre Organ accompaniment composed  and performed and also pre-recorded by Langdon.

The classic makeups created in The Land Of A Thousand Faces show (Frankenstein’s Monster and the “New” Bride Of Frankenstein) were applied to tour visitors selected before the start of the show, and already seated in place when the curtains parted on the makeup department set following The Spirit Of The Mirror and show introduction, and opening greetings by the show host, who of course is the Spirit Of The Mirror in full “Spirit” makeup, which he removes in front of the audience.

No video was used in this show, nor in Castle Dracula. Giant 12’x12′ (twelve foot by twelve foot) color transparencies – four in each set – illustrated Glamour Makeup, Casualty Makeup, Old Age makeup, and clown makeup on various stars of the day (Phyllis Diller was the recipient of the beauty makeup in the photo series), Edgar Bergen (Candice’s famed ventriloquist father) was the clown, and so on. As each type of makeup was described each frame would light up, easily seen by all 1,700 tour visitors from any seat in the theater. At the end of the 20 minute show, the tourists had been transformed into Frankenstein’s Monster and His “new” Bride (a special makeup conceived by Verne Langdon and Bob Zraick) in full view of the audience as the rest of the show was proceeding by original show makeup artists Keith Crary and Nick Pagliaro, and appeared in a brief sketch where the show host becomes the “mad doctor”, and miming again to Carradine’s “mad doctor” voice and Langdon’s pipe organ score, the two monsters are enclosed in an “eternal life” cabinet by the mad doctor, then the switch is thrown and the cabinet “explodes” in a giant blast of smoke, revealing two charred skeletons in place of the tourist actors. This was the grand finale of The Land Of A Thousand Faces Makeup Show.

Towards the end of the run of the show (around June 1978) The Incredible Hulk was added to the show. The Hulk ran onto stage and grabbing the victims, punched his way through a solid brick wall and led them out (possibly to be fed to the perfomers in the Animal Actors show next door).

The title of the show comes from the title given to Lon Chaney ‘The Man of a Thousand Faces’.

Many thanks to Verne Langdon for additional information 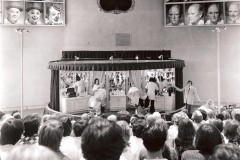 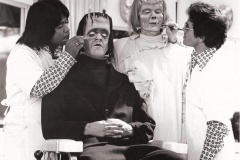 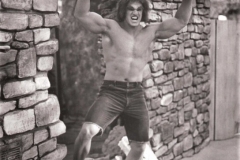 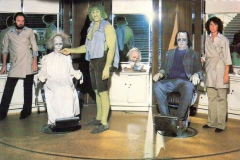 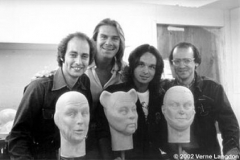 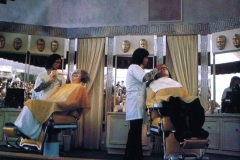 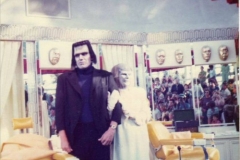 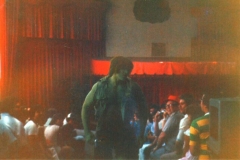 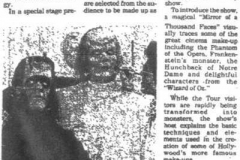 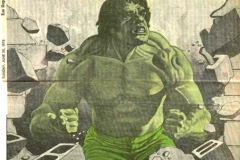