Flight of the Hippogriff

Learn the proper way to approach a Hippogriff before you take-off on a family-friendly coaster that spirals and dives around the pumpkin patch, and swoops past Hagrid’s hut.

Dates: The attraction first opened at Universal Orlando on June 18, 2010.
The Universal Studios Japan version opened on July 15th 2014.
The Universal Studios Hollywood version opened, along with the rest of the Wizarding World of Harry Potter, on April 7th 2016. There was a soft opening / technical rehearsal on February 12th, 2016, and there have been occasional rehearsals during the weeks leading up to the official opening date. 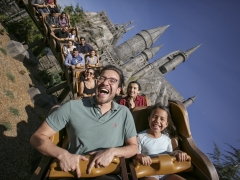 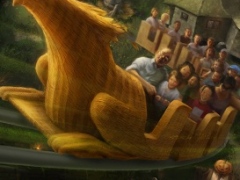 It was built on the Upper Lot, on the site of the former Universal Amphitheatre.

The Flight of the Hippogriff was originally a remodelling of an existing rollercoaster (Flying Unicorn) at Universal Orlando. It proved popular, so has been duplicated in other Wizarding Worlds. Although short, the ride is a high-quality smooth rollercoaster.