The Fast & The Furious: Extreme Close-Up

Launched on the 15th June 2006, The Fast and the Furious Extreme Close-Up offered a glimpse behind the scenes of a thrilling special effects sequence for an a high-octane action movie.

The tram entered the stunt demonstration arena, labelled as Stage 55, on the backlot at Universal Studios Hollywood. As the demonstration commences, an overhead helicopter shoots at the cars, spraying up water as the bullets hit the pavement. Suddenly, a stray bullet hits a gas tank causing a massive explosion hurling the cars towards the tram.

The attraction was originally designed to be a demonstration of how pre-visualisation is used to plan stunt sequences, with the video below shown on the tram before entering the attraction.

As with all new attractions, a period of “tweaking” happened over the first few months of operation. The tour guide spiel evolved so that instead of describing the difficult concepts of “pre-visualisation”, the guides just hand over to a “stunt director” who takes us through a “rehearsal” and then a “take”. Even two months after operation, occasionally one of the robot arms needs a bit of a rest, as can be seen in the photo below. 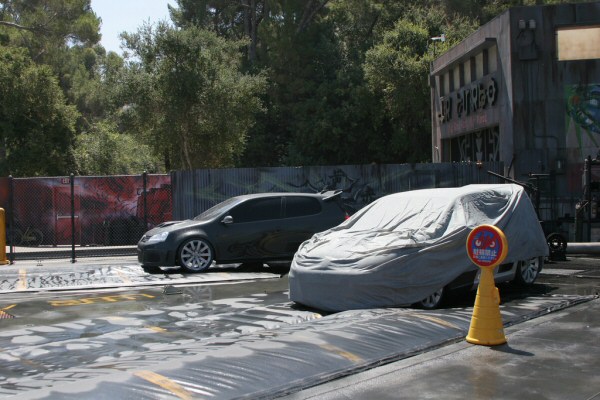 This stop on the tram tour has closed indefinitely as of July 2013. There are rumours that it’s due to objections to the attraction received from the team behind the Fast & Furious movies.
However, it’s more likely the attraction was pulled as soon as pre-production work began on the new Fast and Furious: Supercharged attraction that’s the finale to the Studio Tour.
The Fast & Furious movies have been a huge success for Universal, and it’s great to see Universal property being celebrated on the Studio Tour. 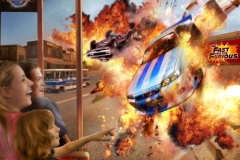 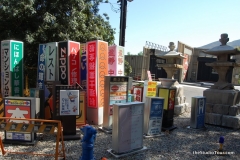 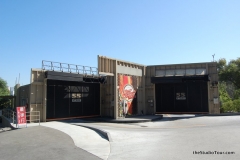 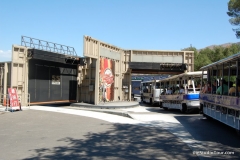 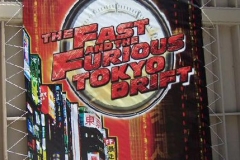 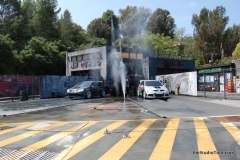 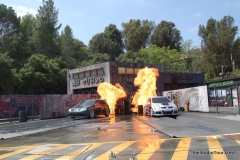 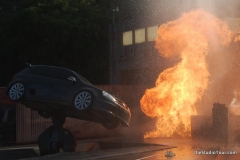 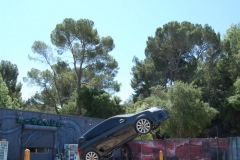 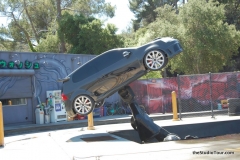 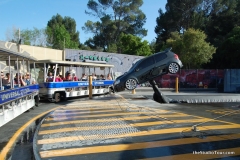 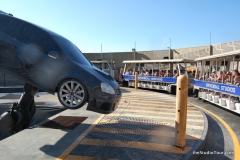 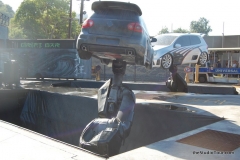 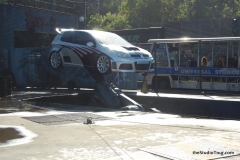 Guests will be mesmerized with an awesome display of explosive action as two drift-racing vehicles, each attached to gigantic robotic arms, careen alarmingly out of control, approaching the Studio Tour trams at speeds of up to 45 mph. Upon impact, the cars explode in a plume of fire and smoke which is dispersed 25 feet in the air and completely envelops the 10,000 sq ft. outdoor arena.
The specially-rigged cars each weigh only 500-lbs (compared to the 3,300 lbs. weight of an actual vehicle). The vehicles have been stripped and designed to accommodate the nimble motion control required for breathtakingly-orchestrated movements.

In a grand finale, the experience culminates in a dexterous “automotive dance demonstration” of intricate programming set to a toe-tapping hip-hop beat, facilitated by a revolutionary motion control simulation system.

The Fast and The Furious attraction started contruction in March 2006, and opened on 15 June 2006. The area was formerly occupied by a model used in Dante’s Peak. The area immediately before the attraction which is now known as the Transportation Department was previously the Greens Department, with some displays of foam rubber trees. The trees are still there, but are now in the Jurassic Park area. In reality, the Greens Department hasn’t moved – the tour guides no longer refer to it. The actual Transportation Department is elsewhere on the backlot – next to the Prop Warehouse beyond the Square of Warriors.

The computer-controlled robotic arms featured in the attraction went through exhaustive testing, with the final stages taking place in the cinema service parking lot below the Curious George parking structure (video below).

From mid April the construction area became a no-go zone for Tram tours, as asphalt was poured, robots and control systems were installed, walls were built and picture cars rolled into place for the exhibition area before the main attraction. 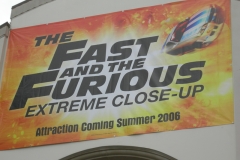 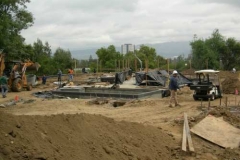 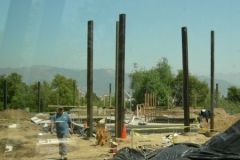 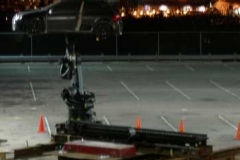 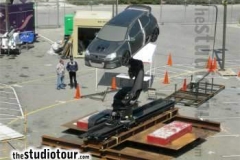 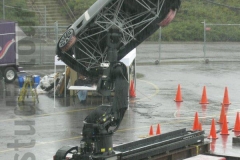 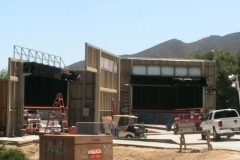 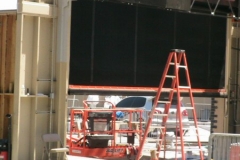 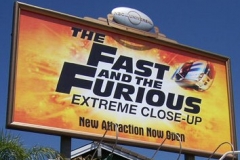