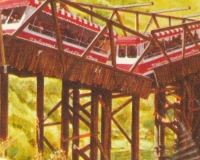 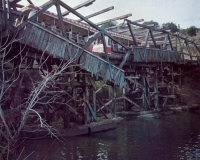 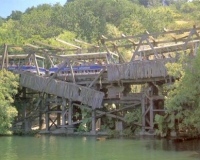 1974 – 2008 The tour guide tries to take the tram around the bridge rather than going over it, but suddenly the tram driver takes the tram towards the bridge. Will it hold out? Nope – just as the tram reaches the mid point of the bridge, it creaks and massive timbers fall away causing the bridge to “drop” the tram a foot or so under the weight of the tram. The tram drives on, everyone survives, and visitors drive past the bridge as it rebuilds itself for the next tram.

2008 – 2012s The tour guide spots a red ‘Hot Set’ light, and asks the driver to bypass the bridge. But it’s too late. We can hear through crackling walkie-talkies that the Pyro is ready, and the exploding bridge is ready to shoot – everyone should stay clear. As the tram drives onto the bridge, there’s a burst of smoke, followed by an explosion as the bridge collapses underneath us. The tram drops, but manages to make it off the bridge and back to safety. 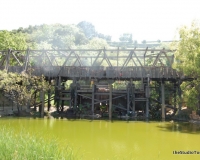 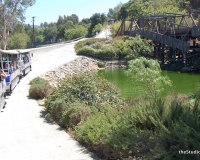 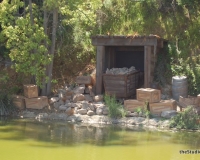 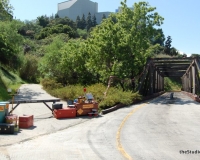 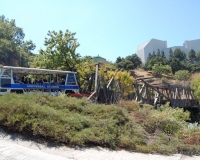 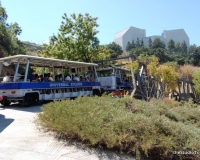 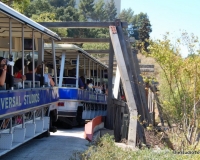 Alan Smithee is the name used when directors ask for their name to be removed from the credits of a movie, either due to professional embarrassment, or due to disagreements within the creative team.
Films that the director was perfectly happy with in theatres were often ruthlessly cut for TV, resulting in the director credit being changed to Alan Smithee to signal the director’s unhappiness with the end product.
A quick search on the Internet Movie Database (www.imdb.com) reveals no less than 54 movie or TV projects have the Smithee name attached to them as director. It also turns out he wrote, produced, composed, production designed and edited. It turns out the name is an anagram of “The alias men”.

Hydraulic systems are used to move the bridge and various collapsing elements, under the control of a computer system (originally made by Anitech).

The bridge was out of action for a couple of years (between 2006 and 2008) but was repaired and brought back to life after Studio Tour guides were asked for suggestions to add interest to the tour while the New York sets were rebuilt following the June 1 2008 Fire. 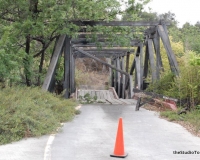 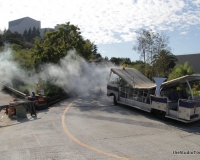 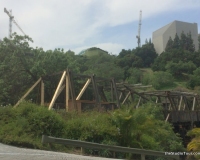 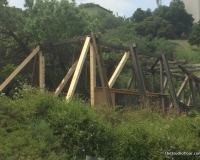 Although it’s not used regularly nowadays, your tram may head over the bridge if there are delays or heavy production work elsewhere on the lot. 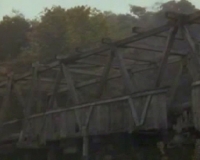 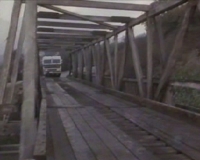 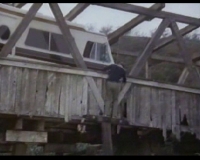 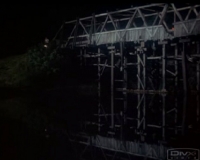 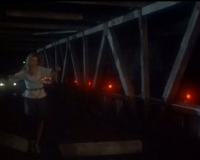 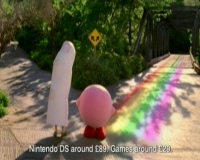