Added to the Studio Tour in 1974 (timed with the release of Earthquake that same year), this unique (and short-lived) attraction must have seemed like such a good idea at the time.

As the tram approaches a quiet Californian hillside, a rumbling sound is followed by a terrifying rockslide which threatens to engulf the tram with massive boulders.

Press Release from 1976
The giant rockslide is another of the thrilling special effects designed to give visitors a personal demonstration of how it’s done in the movies.
As the tram passes below a rocky hillside on the Tour route, the earth grumbles and groans. All of a sudden the top of the hill begins to crumble and styrofoam boulders careen down the hill. The rockslide is completely recyclable and the entire process takes only 90 seconds.

The photos below show the main problem with this part of the Studio Tour – fake rocks just don’t do what they’re supposed to in the script. 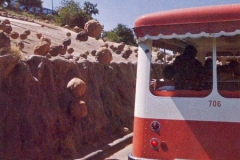 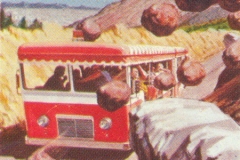 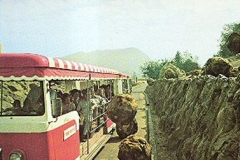 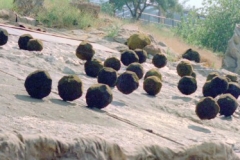 Just above the rocky wall immediately beside the tram is a metal scoop bucket which collects the rocks and then transports them back up the hillside where they sit on a tilting platform until they’re required to perform again. The mechanism was quite slow, meaning there was a few minutes between shows while the scoop travelled up the hill collecting rocks, before moving back down the hill to it’s initial resting place.
The other problem was more to do with the absorbent quality of the materials used to make the rocks. If the hillside was wet (or if it was raining) the rocks absorbed water before spraying it all over the guests in the tram as they hit the bottom of the hill.

Thanks to Royce Matthew for information