“Things are not always what they seem at Universal. This house, for example, never burns down. The burning effect is accomplished with the use of gas jets and fireproof building material. Naturally the building has no back or sides.”
From “Universal Studios Shows and Special Effects” Viewmaster K74 accompanying booklet, 1979

From Studio Tour Guide script:
BURNING HOUSE
If you’d like a close-up picture of the first movie set on our tour, it’s coming up on my side. Look! The house is on fire! (pause) Well, it’s nothing to worry about; the flames are real, but the house will never burn down. In fact, when we go around behind the house, you’ll see that it’s just a facade. Facade simply means “false front”, and that’s all we need for exterior filming, since interior scenes are usually filmed on a sound stage. On our tour today we’ll see more than 500 facades that are used for exterior filming.

The facade was constructed from non-flammable materials and was initially seen with no flame. When the tram approached, the gas jets hidden in the structure were triggered, and the flames began. Black paint around the windows was used to simulate charred wood.

Originally located on what is now the Upper Lot, adjacent to the Amphitheatre, the Burning House was moved in 1982 to it’s final resting place on what is now the start of the Jurassic Park River Adventure. The house was removed in 1992 during construction of that ride and (ironically) the Fire Station. 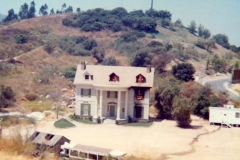 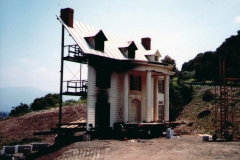 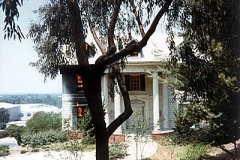 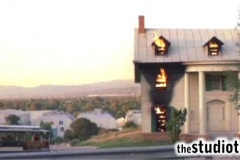 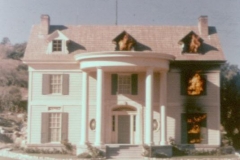 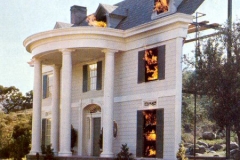 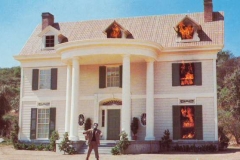 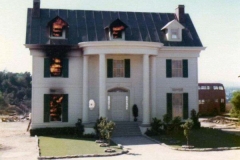