This high-technology attraction featured animatronics and live actors in a spectacular laser battle. The ride building replaced the short-lived Rockslide attraction, and was replaced in 1992 by the foundations of the Back to the Future (now The Simpsons) show building.
The Battle of Galactica was the first themed attraction to feature audio-animatronic characters outside a Disney park, and was the first dark ride to combine sophisticated animatronics and lasers with live actors.

The animatronic characters were engineered by Alvaro Villa at AVG Entertainment who’d previously worked on the Castle Dracula show.

One of the Cylons featured in the attraction was in storage at Universal (in the “Thunderdome” tech service area under The Simpsons Ride), until it was unearthed in early 2014 (see below).
It’s not known what happened to the rest of the animatronic characters. One of them MAY be in a collection owned by Forrest J Ackerman. The cylon featured in Beverly Hills Cop III is NOT from this attraction. Despite security being on patrol in 1992 when the closure of the ride was announced, it’s believed someone still managed to remove the Cylon from just outside the attraction next to the “laser” cannon.

There’s no physical evidence of the attraction building any more, but an animatronic Cylon from the attraction appeared in the Universal Experience exhibition in 2014 to celebrate the 50th Anniversary of the Studio Tour. 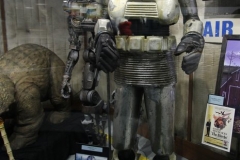 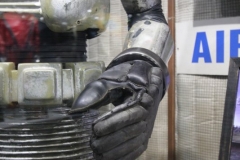 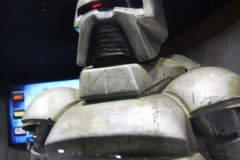 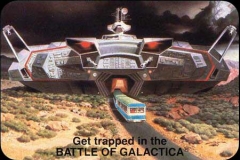 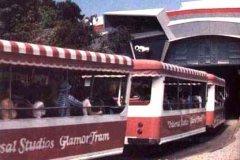 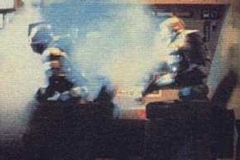 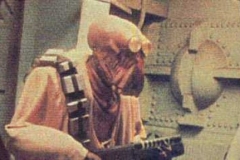 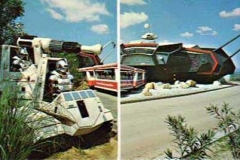 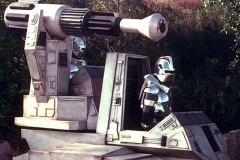 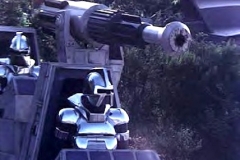 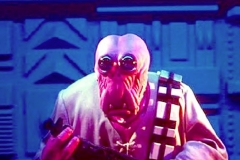 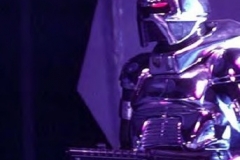 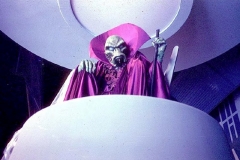 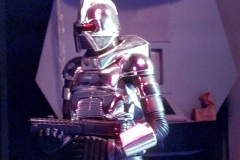 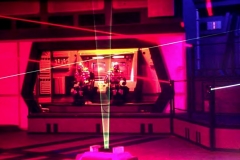 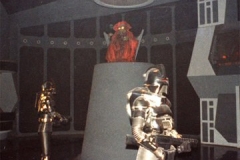 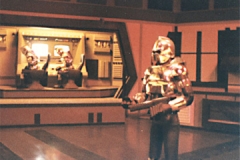 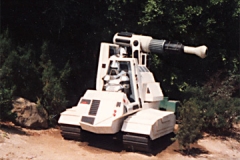 THE BATTLE OF GALACTICA

“..Wait a minute, there’s some sort of spaceship blocking the road.”

(Centurion Voice: “Halt foolish humans, you have blundered into a Cylon Battle Zone. You are now our prisoner – Do not attempt to escape or we will blast you!”)

“We are not going into that spaceship! What is going on here?”

Suddenly the zap of a cannon is followed by an explosion. The alien land vehicle has just fired the shot across the bow of the tram at the rock.

“Yes sir, anything you say!” (The door of the spaceship opens and the tram proceeds inside.)

“It seems that we’re being captured by a Cylon battle ship. What will happen inside is anybody’s guess!”

(Tram advances into the spaceship.)

(Centurion Voice: “By your command, this group of very strange looking earth creatures has been captured while attempting a sneak attack on our battleship. Their general is called TOUR GUIDE.”)

“General? What: I’m not a general! We weren’t attacking anything, were we folks?”

(Dialogue continues and Cylons decide to blast off. The countdown begins…)

(Colonial Warrior: “Get out of here. I’ll be alright.”)

“Ladies and Gentlemen, we have just survived The Battle of Galactica, inspired by the television series, “BATTLESTAR GALACTICA”.”

THE BATTLE OF GALACTICA – OPERATIONAL PROCEDURES:

There is also an electric eye sensor on the Guide’s side of the tram which, if interrupted, will shut-down the show and open the doors.

THE BATTLE OF GALACTICA – SAFETY PRECAUTION:

The Guide must not leave the tram without pressing the “Emergency Off” button. Also the guide should avoid looking into a direct beam or a bright reflection, when one is visible.

The federal government requires that this warning by included in all manuals dealing with lasers:

“CAUTION – Use or adjustments of controls or of performance procedures other than those specified herein may result in hazardous radiation exposure.”

This company produced the ‘Theatronics’ (aka Animatronics) for this attraction as well as for the Castle Dracula show on the Upper Lot. In the early 1980s, they produced this demo video: