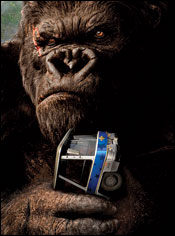 Official teaser website:
He’s Never Been This Real.
KING KONG
360 3-D
Created by Peter Jackson
Your heart pounds. Your adrenaline flows. Your survival instincts are on overload.
Welcome to the largest, most intense 3-D experience on the planet.
It’s 3-D to the next level.
COMING SUMMER 2010

The first King Kong attraction, based behind the New York Street facades, was destroyed in the June 2008 fire, along with the New York Street sets.
As Universal is a working movie studio, the priority for the studio was to get the sets rebuilt so they could be used for filming.

The new King Kong attraction is in a different location – on what was formerly a parking lot near the Collapsing Bridge. Using this new site enabled the studio designers to make maximum use of the new Metropolitan area sets, rather than having a large chunk of real estate taken up with part of the theme park. Instead of being based on two separate sets (the TV news sequence and helicopter crash, then the Kong encounter) the new King Kong 360 3-D is a ‘drive-through’ attraction where the tram will stay in a single line, much like the old Battle of Galactica attraction. It will feature a close-up encounter with a more high-tech version of old banana breath, using a massive wrap-around 3D projection screen. In 1986, when the original King Kong Encounter was introduced to the public, they were blown away by the breakthrough technology which Universal had made use of. To make the experience truly remarkable, the tram guests will wear 3D glasses.

After the success of his 2005 King Kong movie, Peter Jackson experimented with a 3D version of some of the CGI scenes. He was blown away by the quality of the images, and the immersive nature of the scenes.
The new King Kong 360 3-D incorporates the same digital model of Kong that was used in the movie, but in brand new footage created by Peter Jackson. 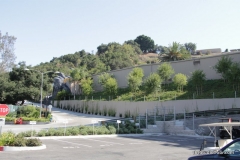 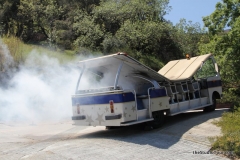 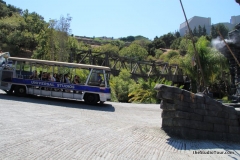 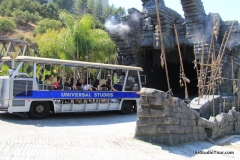 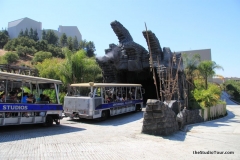 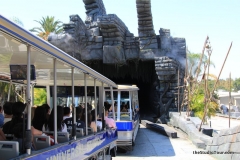 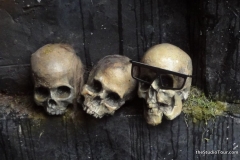 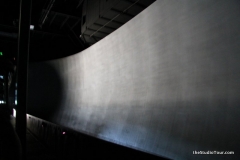 At the time of opening, King Kong 360-3D was the largest 3-D experience in the world.
Two 180-foot-long by 40-foot-tall screens surround the tour trams so that wherever the guests look, they’ll see Kong, his environment, and his adversaries. 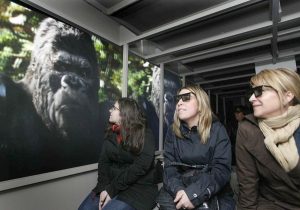 A test run of the concept off-site in January 2010 (photo right) used 3-D test footage from the Peter Jackson’s 2005 King Kong movie. The film was never released with any 3-D elements, but footage was created for test purposes during production. The projection system and ‘tram-mover’ system was tested in a large hangar at Playa Vista until construction was complete on the show building at Universal.
The tram-mover system uses a series of airbags to make the tram and guests shake and move in time with the projected action.
The visual effects director working on the project, Joe Letteri, used many of the advanced digital cinema tools that were created by WETA Digital working for James Cameron during production on Avatar. 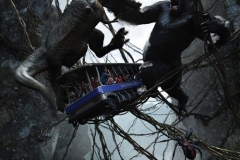 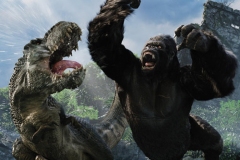 It’s thought that if King Kong is out of action, the Collapsing Bridge will be used as an alternative route, but it’s thought to be unlikely the tram will visit both attractions. 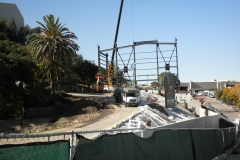 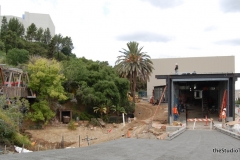 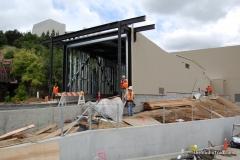 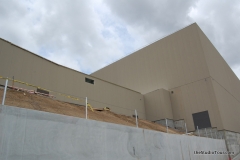 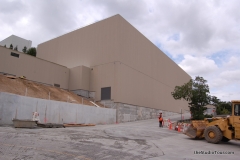 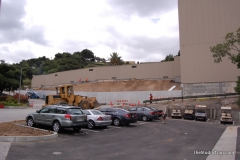 Hear what fans and the general public think of this new attraction directed by Peter Jackson based on the blockbuster film and taking place on Skull Island. This new 3D experience puts you right in the middle of the action as King Kong takes on a swarm of deadly T-Rexs.

The Intensity Lasts a Lifetime advert