Following the closure of the Fast & Furious Extreme Close-Up Studio Tour attraction in 2013, and the success of the immersive movie environment of King Kong 360 3D, Universal Creative have chosen to go 3D with their all-conquering 4-wheeled franchise. 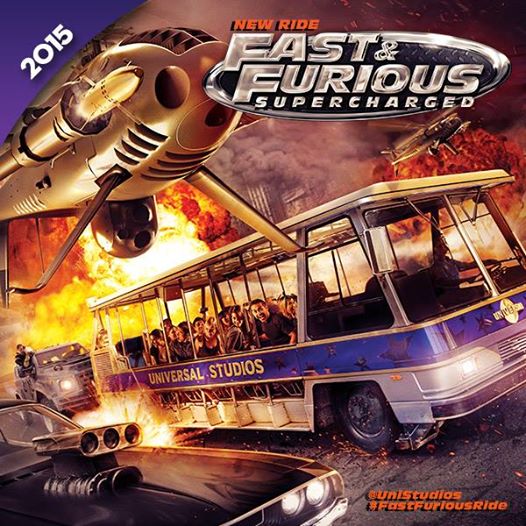 This is an excellent climax to the Studio Tour. Building on the success of King Kong 360 3D this ride uses a variety of different techniques to immerse guests in the Fast & Furious world.

Scene One – The Charger

The narrative begins when the Studio Tour guide spots a black 1970 Dodge Charger just up the hill from the Chicken Ranch, next to the House of Seven Gables. The guide radios security, who appear magically on the monitors in the trams. It quickly becomes clear that the car is of considerable interest to the FBI, who have been looking for it. They reveal the driver is one Dominic Toretto (who fans of the Fast & Furious movies will recognise instantly, as the character portrayed by Vin Diesel).

(The Guide responses are improvised, so this is an approximation of what they’d say)
Guide: [on passing Colonial Street entrance and spotting the Charger] “There’s an unauthorised vehicle on the backlot – I’ll have to call this in to security”
Security: “This is security – what’s going on Studio Tour?”
Guide: “There’s a 1970s Charger parked outside of Colonial Street and it shouldn’t be there”
Security: “OK tour, I’ll send someone down to check it out ASAP”.
—–Tram continues up towards Whoville—-
Security: “Studio Tour, looks like me might have an issue. I’m patching you into Agent Novak from the FBI”
Novak: “I’m sorry to interrupt your fun, but we’ve got video surveillance on that Charger you all saw. We ran it through the system and the driver has been positively identified as Dominic Toretto. I’ve been tracking this guy for a while. He’s a hardened criminal. He’s likely armed, and is definitely dangerous. My men and I are on the way to apprehend him right now. If you see him, don’t be a hero. Don’t engage him, just keep a safe distance and report any further sightings to Studio Security immediately. We’ll handle it from there. ”

Novak: “Look this might be more serious than I thought. What just happened? This is a secure line. Who are you?”
Hobbs (Dwayne Johnson): “I’ll tell you who I am, boy. I’m the reason bad guys use a night light. I’m the reason the boogeyman begs his momma to look under his bed. And I’m the reason you just lost control of this whole operation. My name is Special Agent Luke Hobbs of the U.S. Diplomatic Security Service. As of 16.9 seconds ago, I’m the man in charge.”
Novak: “The hell you are.”
Hobbs: “Let me clue you in on two things sweet cheeks. One, there’s a high value witness from the federal protection programme aboard your vehicle. And two, an international crime syndicate led by Owen Shaw is homing in on this vehicle to take that witness out. Shaw’s as ruthless as they come and he’ll stop at nothing to eliminate his target. Every living soul on this vehicle is in serious danger. Other than that, enjoy the ride.”
Novak: “This is not your jurisdiction”
Hobbs: “It is now, stink pickle.”
Novak: “I’m so tired of you state guys stepping in. Just whenever you feel like it…”
Hobbs: “Mute him.”
Novak: “Don’t you….” [Guide presses Mute button]
Hobbs: “That’s better. We’re moving your vehicle to a safe location until we have the situation under control.” [removes sunglasses] “Until then, I want everybody to stay calm. Enjoy the ride. I’m taking care of business. Hobbs out.”

The tram is driven into a ‘well-known street racer party hangout’ on the backlot for safety.

This section is led by Roman Pearce, who appears on the Tram monitors.
Roman: [off screen] “…..they just got here. Alright I got it.” [to camera] “Well, listen, Hello beautiful people, particularly to you right there, Miss, in the third row. How you doing? You good? My name is Roman Pearce. Pleased to meet you. My buddy Hobbs asked us to stash you from Shaw for a while, so I brought you to our secret spot. We’re having a few friends over, it’s a little messy, But it’s all good – the more, the merrier. ‘specially you right there in the third row. You know what I’m saying.” [mimes ‘call me’] “See over there? That’s Hobbs’ urban assault vehicle. The best truck the US Government can buy. That work of art back over there? That’s made by my man Tej. Think of it as like a Mona Lisa on wheels. Actually…” [Letty interrupts him]
Letty: [entering] “So did you break it down to them?”
Roman: “What’s that?”
Letty: “You had one job to do, Roman. One! Alright, look guys, we’re gonna keep Shaw from finding you, but to keep you safe, we need your help. We don’t want the syndicate tracking us here. Put away your cameras and turn off your cellphones. One flash or one ringtone could give us away.”
Roman: “I need you all to take this real serious”
Letty: “OK – pull into the next bay and we’ll meet you in there”

The tram pulls forward to reveal a full-on dance party in full swing. Each individual tram car is blocked in (for safety, presumably) so the guests have a more enclosed view of the party.

“Fast & Furious—Supercharged” features the world’s longest 3D projection installation ever created, wrapping the length of the venue with one continuous screen designed to envelop Studio Tour guests in the exploits of perilous street racing.
Built to immerse guests in unprecedented realism, the ride debuts a custom-built compound curved screen spanning nearly 400 feet in length and 40 feet in height, and configured with 34 of the most technologically advanced 4K projectors. Featuring a combination of live actors shot against green screen special effects and unrivalled photo realistic imagery, the ride’s media will alter the guest’s perceived reality to deliver a convincingly real world, putting guests in the driver’s seat.
The seamless integration of 3D imagery on the largest, most expansive 3D screen ever created—with a highly intense directional sound system and precision synchronized movements—will redefine theme park ride immersion.

Scene Three, the Dance Party, features an excellent use of Musion Eyeliner projection surface. The ‘screen’ is a thin layer of reflective foil, which is almost completely transparent, allowing you to see straight through it to the lights and other set pieces beyond it. It’s been used to create so-called ‘hologram’ appearances of performers at a variety of different events. The projections appear fully 3D because we can’t see the projection surface, so our brains are not able to process them as 2-D figures. When seamlessly integrated with moving scenic pieces (as when Dominic Toretto rides the urban assault vehicle up into view), the illusion is complete.

The powerfully immersive surround sound resonating throughout the attraction will be an acoustic achievement that utilizes the latest audio technology to envelop guests in the world of “Fast & Furious.” Orchestrated in tandem with non-stop action sequences on the massive screen and synchronized to the tram’s movements, the energizing score and audio effects will deliver a considerably more impactful and astounding experience.
The ride’s superior sound system will produce 80,000 watts of sound from 56 highly-efficient speakers and 44 discrete audio channels strategically situated throughout the attraction and behind the giant screen. At 108 decibels, the ultra-crisp sound effects will intensify the impact far beyond the typical movie-going experience. Unique to the ride’s advanced sound system is the ingeniously designed perforated screen, dotted with millions of tiny holes to amplify sound and produce a multi-dimensional stereophonic soundscape.

In mid-2014, “Fast & Furious—Supercharged” went into production on location at a giant soundstage facility in Playa Vista, California. The films’ stars – Vin Diesel, Dwayne Johnson, Michelle Rodriguez, Tyrese Gibson and Luke Evans – joined Universal Creative in an elaborate green-screen special-effects shoot to capture the breathtaking stunts and action sequences for the media portion of the ride.
The action sequences were later composited into a selection of HD scenic images that were shot in and around Los Angeles to deliver hyper-realistic imagery and interactions with real environments as opposed to fabricated CGI images.

Making of the attraction

As of April 2015, the show building was complete externally, and the interior of the huge building was starting to take shape.

Announced April 8th 2014
From New York Times article
“Also coming next year, the company said on Tuesday, will be “Fast & Furious – Supercharged,” a movie-thrill ride hybrid in which occupants of Universal’s famed back-lot trams will be encircled by 400-foot-long movie screens. “We’re going to make it feel like those trams are being pulled through the streets at speeds of over 100 miles per hour,” said Chick Russell, an executive producer for Universal Creative.”

Universal City, California, June 23, 2015 – Vin Diesel, Michelle Rodriguez, Tyrese Gibson and Jason Statham attended today’s red carpet premiere of Universal Studios Hollywood’sSM all-new thrill ride, “Fast & Furious—Supercharged”, and were among the first to experience the attraction, which debuts as the grand finale to the world famous Studio Tour.
Also attending were Fast & Furious series filmmakers Neal H. Moritz and Chris Morgan, who were joined by Steve Burke, CEO of NBCUniversal; Ron Meyer, Vice Chairman, NBCUniversal; Tom Williams, Chairman, Universal Parks & Resort; Larry Kurzweil, President and COO, Universal Studios Hollywood; Mark Woodbury President, Universal Creative; and L.A. Mayor Eric Garcetti.
After experiencing “Fast & Furious—Supercharged,” Vin Diesel reacted by saying, “Wow…wow was that cool. It’s incredible, it’s really remarkable. It’s not like anything I’ve ever seen. Everyone on the tram said, ‘Can we do it again?’ It’s super cool!”
This dynamic new ride, inspired by Universal Pictures’ blockbuster film and featuring cast members from the series, including Vin Diesel, Dwayne Johnson, Michelle Rodriguez, Tyrese Gibson and Luke Evans, is a technologically advanced mega-attraction designed to catapult guests into the high-stakes underground world of street racing at perceived speeds of 120 miles per hour.
A high-octane adventure, “Fast & Furious—Supercharged,” is conceived as a new installment to the Fast & Furious franchise that can only be experienced at the Entertainment Capital of L.A. The ride opens on June 24, 2015.
“Fast & Furious is an exhilarating global film phenomenon that has been consistently characterized as a thrill ride. Now we can officially say it is,” said Larry Kurzweil, President of Universal Studios Hollywood. “As Universal Studios Hollywood’s ambitious epic transformation continues as part of our 50th anniversary, we are thrilled to bring Universal’s incredibly compelling film franchise to life.”
An exciting hydraulic motion-based ride, “Fast & Furious—Supercharged” tells an original Fast & Furious story. The attraction fuses sophisticated special effects with a state-of-the-art 3D audio system and 3D-HD imagery projected onto the world’s longest and most expansive 360-degree screen. Spanning nearly 400 feet in length to encircle Studio Tour guests within a newly constructed 65,000-square-foot structure on the legendary backlot, the sprawling custom-built screen employs 34, 4K projectors and a specially configured projection system to envelop guests in unprecedented realism.
Coupled with an intense blend of thrilling visceral effects, “Fast & Furious—Supercharged” takes guests on a wild ride that begins the moment they board the Studio Tour. Exclusive interstitial content filmed with cast members is featured on the tram monitors, highlighting interactions as the cast engages guests en route to the climactic ride. Along the tram route and featured at the ride, sightings of numerous prop cars from the Fast & Furious series, including Dom’s iconic Dodge Charger, enhance the story.
“We’ve perfected an exciting new form of immersive entertainment that combines over-the-top hyper-realistic action adventure with exhilarating custom-made special effects that will transport guests into the thrilling world of Fast & Furious, said Mark Woodbury, President of Universal Creative. “Our collaboration with Universal Pictures to create an authentic experience through epic storytelling and technological breakthroughs continues to be a hallmark of Universal Studios Hollywood.”

The Moving Picture Company was awarded Outstanding Visual Effects in a Special Venue Project for their work on this attraction.