Earthquake: The Big One

As the Studio Tour tram enters Stage 50 (“the only split level soundstage in the world”), all seems quiet as the crew are on a lunch break. Then the ground starts shaking… 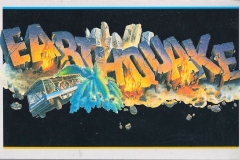 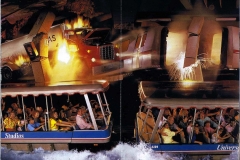 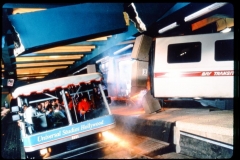 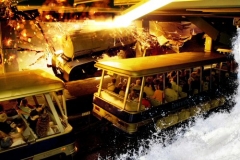 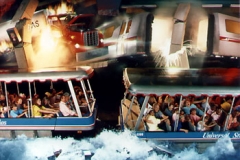 The attraction simulates a large earthquake, rated at 8.3 on the Richter scale. As the tram leaves, the entire attraction resets itself in just 15 seconds ready for the next tram.

The attraction has been closed twice due to real earthquakes: October 17 1989 following the Loma Prieta tremblor in Northern California (7 months after the attraction opened) and on 28th June 1992, resulting in a closure for 24 hours for safety checks.

(NB: The video narration refers to Stage 52 – this is incorrect. The attraction is in a building named Stage 50. The attraction never featured live performers, except for the purposes of this video.There are some additional pyrotechnic effects which aren’t part of the attraction now).

The Earthquake attraction has featured in a small number of films & TV shows.

(from The Home & Family Show)

History of the site

Earthquake: The Big One was built in 1988, and replaced the Tower of London set which stood on the spot. Stage 50 was constructed for the attraction – it’s not one of Universal’s soundstages.