September 20th 2014: This stage has now been demolished. The Opera House facades have been put into storage, and the rest of the stage has been completely demolished.

We understand this is to make way for an expansion of the theme park (possibly for a Nintendo attraction). It’s a shame that despite Universal proudly announcing that Stage 28 is historic and one of the first stages built on the lot, containing the iconic opera house sets from the 1925 Phantom of the Opera, the expansion of the theme park has destroyed the chance for future VIP Tour visitors and movie crews the thrill of visiting or working in such an atmospheric location. It was a stage that was in almost constant use, although there are bigger (and more soundproof) stages all over the lot.

See also More photos from our friends at InsideUniversal.net

August 26th 2014: There are rumours that Universal Studios plan to demolish this historic stage; one of the few structures on their property in it’s original location still in regular use. Stages 3+4 and 5+6 and 16+17 were built in 1916.
Variety.com have confirmed that the demolition is planned, but that a large effort is being made to preserve the historic Opera House sets for future generations, to be displayed at a different location, and to be more visible to the public.
The stage without the Opera House set, although historic, has very little architectural merit.
Read more at Variety.
There was also a petition you could sign to try to reverse any decision, although it’s obviously too late now! 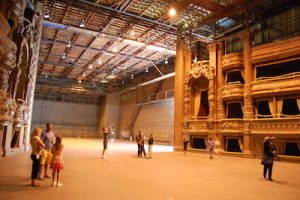 This historic stage was known as the Phantom Stage, because at one end of this stage there remained the original sets for the Paris Opera house, as built for The Phantom of the Opera in 1925. When the soundstage was demolished in 2014, it’s believed that the parts of the auditorium set that still survived are the oldest surviving movie sets in the world. The Phantom stage was also unique in that no other soundstage in Hollywood history has been named after a single film. This stage was the oldest and second tallest on the Universal lot.

With construction beginning in July 1924, the stage was the first to be constructed from steel and concrete. Originally, stages were raised platforms in the open-air – this was necessary to get maximum light onto the sets (from the Californian sunshine). Wood and glass constructions were then built (from around 1916) to protect increasingly sophisticated sets, props and equipment from rain, but these proved difficult to work in under the hot sun. Large enclosed stages began to appear in the early 1920s.

The elaborate auditorium interior shown above was still in position on Stage 28 until 2014, when it was removed to be preserved elsewhere. The set was used as an auditorium in a number of film & TV projects. The rest of Stage 28 and it’s tank were in almost constant use (see the list below) without any reference to the fact that the opera house sets are at one end.

A caped figure had been seen running around the catwalks above the stage – could this be Lon Chaney repeating his most famous role even after death in 1930? Other reported phenomena include lights turning on and off and doors opening and shutting. An electrician reportedly fell to his death from a catwalk in 1925.