A massive fire started deliberately on the backlot destroyed a fifth of the standing sets. The total damage was estimated at up to $50 million, and was started in a Brownstone Street alley by a security guard with a cigarette lighter. The flames were fuelled by gale-force winds and took hours to get under control.
It was described as one of the largest fires in Los Angeles history and took 400 firefighters from 86 companies in the LA and Burbank areas along with 6 helicopters to get it under control.

Sets that were damaged or destroyed included:
– New York Street (recently seen in Dick Tracy – destroyed)
– Ben Hur set (destroyed)
– Courthouse Square (gutted, except the Courthouse). The sets as seen in Back to the Future 1 – 3 were rebuilt to different designs – only the Courthouse is original.

The security guard was hired to protect 21 period cars that were being used in the Sylvester Stallone film “Oscar”, which were also destroyed in the fire, and was believed to be working for a private company called ‘Burns Inc.’
He was sentenced to 4 years in prison in January 1992.

Rebuilding began on 26 November 1990 after designers came up with new designs to retain the original ambience, but incorporate changes to make the sets more useable to modern crews.
Steven Spielberg was involved in the design phase. The first production to shoot on the newly rebuilt New York sets was Disney’s Newsies. 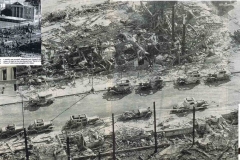 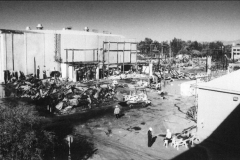 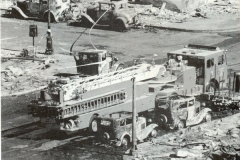 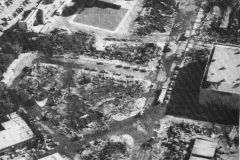 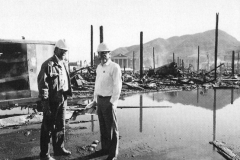 This was no special effect… Disaster Planning Works!
By Paul Holehouse

At 7:15 p.m. on the evening of November 6, 1990, a security guard on duty in the dispatch office of Universal Studios received a telephone call that would set the stage for a real-life drill of the MCA Corporate Disaster Plan. With hosts of politicians watching election returns just up the hill at the Universal Sheraton, a structure fire was reported on Brownstone Street in the back lot facades of the Studio. A call was placed to Los Angeles County Fire Department Station 60 on Universal’s own lot and the 911 system was activated.

DAMAGE INCURRED
Inside the 420 acre property, the fire and intense heat twisted 12-inch steel beams and marched methodically along the back lot, consuming building facades, vehicles, camera equipment, and anything in its path. Rows of classic cars in pristine condition fed the flames. Millions of dollars worth of movie props and lights along with period costumes rich in motion picture history went up in smoke.
Courthouse Square, the site where Michael Fox went “Back to the Future,” suffered extensive damage; only the clock tower could be saved. Brownstone Street, which played host to “Dick Tracy,” was now just a memory. Streets where Robert Redford and Paul Newman conducted their elaborate “Sting” were destroyed in a shroud of smoke.
King Kong, host to more than four million tourists a year, was barely spared from the blaze, which climbed the hill leading to the Tour Center Complex. Disaster Response Team members established a fire line just below Battlestar Galactica using garden hoses, studio water tanker trucks, fire extinguishers, or anything they could find in an effort to protect that attraction and the garage which houses the fleet of quarter-million dollar trams that lead tourists through the back lot daily.

ENTER THE PLAN
Fire department personnel, accompanied by Emergency Response Team Members of the Emergency Services Department, responded to the disaster armed with property maps identifying water sources, fire suppression equipment, utility shutoffs, keys for access gates, etc. A fire department incident command post was established just below the fire line in an effort to coordinate firefighting equipment.
When I arrived on the scene, I opened the emergency supply storage and stationed a team member at the door to distribute supplies to firefighters and employee volunteers. I then headed for the Emergency Operations Center (E.O.C.) to set up an incident command. Power that had been lost through burned transformers was restored when Resource Team members installed the backup generators to the E.O.C. Once we were out of the dark, the plan progressed at full speed ahead.

Disaster Recovery Teams
Universal Studios is divided into several teams to handle different areas in the event of a disaster (see Part II, Jul/Aug/Sept, 1990). The decision to have these teams translated into a smoother recovery process and contributed to Universal’s successful performance.

Communications Team
Members of the Communications Team were dispatched to Conan Theatre perched
atop the Universal Studios Hollywood complex to establish the repeater for the Disaster Plan radio network. This repeater would enable radios to be distributed to team members. Dan Slusser, Senior Vice President and General Manager of Universal City Studios, found out firsthand what all the emergency equipment was capable of doing under fire. Dan, who also serves as Director of the E.O.C, mobilized a task force of key executives responsible for film vault recovery, transportation, and Studio operations. Security and public relations deployed their personnel in a support effort to the Incident Command Center located in parking lot “W.”

Resource Team
Resource Team members, equipped with radios, flashlights, and protective clothing, began to distribute equipment to the ever-growing army of concerned returning employees. Patrols were established to keep flying embers from straying into as yet unaffected facades. The fire extinguisher and fire hose training of over one thousand employees over the past two years paid off.

Emergency Operations Center (E.O.C.) Team
E.O.C. Team members began monitoring the radio communication to track the arrival of more than 100 pieces of firefighting equipment. The fire’s path was traced on large wall maps in the E.O.C. and executives monitored the news media from televisions powered by the backup generator.

Food and Water Team
The Food and Water Team arrived and provided sandwiches and water to firefighters positioned around the property. Coffee brewed on backup power was more than welcome as the recovery process continued into the early hours of the following day. Mobile hot kitchens were established by the American Red Cross to feed tired and hungry emergency personnel.

THE OUTCOME
Late in the evening when the fire had been contained, members of the media were escorted into the Emergency Operations Center to receive statements from MCA Executives brought into the E.O.C. Conference Room.
An estimated four acres of history valued at more than 25 million dollars had been lost in flames. However, only one injury–a minor burn–was sustained by a firefighter. The orchestrated efforts of the Disaster Plan and firefighting units had saved valuable property and limited injuries despite the 50 m.p.h. gusts of wind.
The Disaster Plan at Universal Studios had been tested and passed the test. The plan continued into the next week of cleanup, using the gloves, dust masks, goggles, and hard hats that were all on hand in the specially designed emergency supply storage facility (see previous article).
Debriefing meetings were conducted in the E.O.C. with all team members to discuss how operations had been conducted and could be improved.
All plans look good in a manual, and paper table-top drills help, but to see the training pay dividends by allowing the company business to open on time the next day…that makes all the effort worthwhile. The management support, long before the disaster, and personal involvement of top executives made the difference.

Paul Holehouse is the Director of Corporate Emergency Preparedness for MCA Inc. He has over 15 years in the loss prevention field, coordinating safety, fire prevention, disaster planning and environmental compliance.