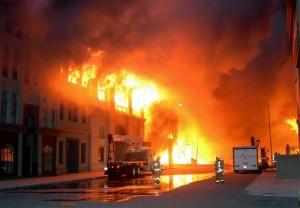 A studio set is engulfed in fire as fire fighters work to extinguish the burning set in the early hours at Universal Studios in Los Angeles, Sunday June 1, 2008. A large fire tore through a back lot at Universal Studios early Sunday, destroying a set from “Back to the Future,” the King Kong exhibit and thousands of videos and reels in a vault. (AP Photo/Mike Meadows) ORG XMIT: LA114

Universal has had more than it’s fair share of devastating fires on the backlot. Although the buildings look like solid brickwork, they are mostly timber framed structures with plastic, timber or plaster cladding to give them a realistic finish.
Although there are regular security patrols and there is now CCTV covering sections of the backlot, it’s a huge area and like any city, problems happen.
There have been eight major fires in the studios history – click on the dates below for more information.

There have also been a number of smaller fires;

As well as the Flash Flood, a whole host of real-life weather effects have been thrown at the Backlot. 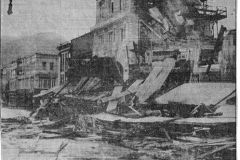 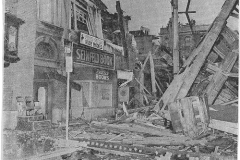