Matte Painting is a simple way of enhancing an environment on location by simply painting on a sheet of glass that’s placed in front of the camera. Part of the glass remains unpainted, and this is where the live action can be seen through the glass.
A matte painting can also establish a scene with certain live action elements superimposed over it. In this case, the entire view of the camera would be painted, with live elements (often 3 or 4 birds) placed over it to convince the viewer it’s a real location. Since the mid 1980s, matte paintings have involved some digital manipulation, and since the late 1990s, the paint has been entirely replaced with digital tools.

This original matte painting (believed to be by Albert Whitlock) was on display at Universal Studios, Hollywood. It’s featured in the climactic sequence where the gas station catches fire. The black section shows where the location-filmed footage will appear.
Below as well is a still from the movie showing how the live action and fire effects footage blends with the matte painting.

Another matte painting by Albert Whitlock, at Universal Studios Florida, in the Earthquake attraction. 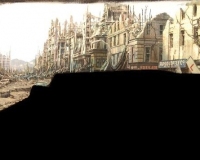