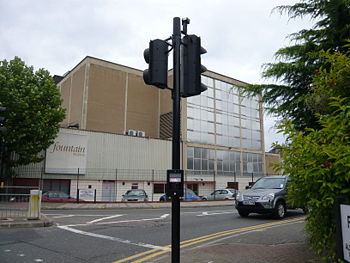 Now taken over by a property developer, with plans to demolish the studio in the future. The studio was known as Fountain Studios in the last years of its’ life as a TV broadcast studio.
The studio has a long history (see Chronology below) of both film and TV production.
The studios were the home of The X Factor shows as they closed but have a long list of other projects from blockbusters to commercials, alongside the constant presence of it’s neighbour the Wembley Stadium.

The studio was especially loved by large scale ‘reality TV’ projects such as X Factor because Studios A and B were connected by a huge motorised wall which could be kept open during shooting, making a single cavernous space; the largest single fully-equipped TV studio in the UK.

When the closure was announced, a group of staff and former staff at the studios got together and created the excellent Wembley Park Studios Archive, which is a great example of what can be achieved.

1923
The first Wembley Stadium was constructed on the site of Wembley Park Tower.

1924
The site which was to become Wembley Park Studios was originally part of the British Empire Exhibition opened by King George V in April 1924.

1926
After the exhibition closed, the Lucullus Garden Club in the exhibition grounds was converted into a film studio by British Talking Pictures, a company formed to develop the new invention of sound films.

1929
Two stages were destroyed by fire, and were rebuilt to be larger and more modern. The first production made in the new studios was Wedding Rehearsal directed by the young Alexander Korda.

1943
The studios were used by the Army Kinema Corporation during the war years. In 1943, Wembley had its second big fire, which destroyed No.2 Stage (now the site of Studio 4) which at the time was being used for film cutting and dispatch. Like the first fire 14 years earlier, the cause of the outbreak remained a mystery.

1955
January: The studio was taken over by Rediffusion Television. With the scenery from the last feature film still littering the studios, the spaces were converted ready for the start of Independent Television in London in only 9 months. The largest stage (Stage 5) was split into studios 1 & 2 with television control rooms dividing it. More than 20 miles of sound, video and control cables were installed. Studios 1 & 2 were finished by the start of September and two more studios were in service by the end of the year.

1960
June: The newly constructed 14,000 square foot Studio 5 first went on air in June 1960. With space enough to contain a complete circus ring, a dance floor, a full-scale orchestra, and an audience of 500, studio 5 was the scene of many of Rediffusion Television’s major productions. This studio, at the time one of the world’s largest specially built for television, has an unusual design. It can be used in two ways: either as one huge studio with up to eight cameras directed from a single control room, or as two self-contained studios, 5a and 5b. When this happens two massive 25-ton steel doors are lowered at a speed of one foot per minute. The connecting side doors are closed, and each sound-proof section can then be used independently for two quite separate productions.

1968
Rediffusion loses its franchise with ITV and the studio briefly becomes a broadcast base for London Weekend Television (LWT).

July 1986
The various companies connected with Lee (Lee Filters, Lee Lighting etc) left the Wembley site, having completing upgrades of the facilities at Shepparton. The studios remained in operation.

1989
Limehouse Television took over the site. Their parent company Trilion bought the studio on June 9th after their previous base (a warehouse at Canary Wharf) was needed for redevelopment.
They set about demolishing the old film studio buildings, but a promised ‘media village’ was never built and instead their overall parent company (Brent Walker Group) did the same as at Elstree and used the site for retail. It was two years before the retail park was built, and until 1991 the rubble of the film studios remained.
Studios 1-4 were demolished, leaving the huge Studio 5.

December 1992
In the midst of a recession, Trilion went into receivership., taking Limehouse Television with them.

1993
Fountain Studios buys the studio as it expands from previous facilities in New Malden, Surrey, where it was home to successful long-running shows like ‘Ready, Steady Cook’ produced by GMG Endemol. Around six months work was needed to get the studios and control rooms fully operational and up to modern specifications.

1994
After refurbishment, Fountain Studios at Wembley opens its doors with Hearts of Gold featuring Esther Rantzen and Talking Telephone Numbers from Celador.
Studio 5 (now known as Studio A & Studio B), at over 39 × 27 metres within the firelanes, is the largest single fully equipped television studio in Britain, some 30% larger than Studio 1 at BBC Television Centre. An unusual feature of the facility is a soundproof double door which can be lowered in 30 minutes to reconfigure the space into two separate studios, each with their own independent control facilities.

2000
The new Wembley Stadium had a lower pitch than the old stadium and during construction, the concrete foundations of the Wembley Park Tower were rediscovered.

2006
On 3rd July 2006 it was announced that the owners of Fountain – Medal Entertainment and Media – were selling the studios to a secret purchaser. An announcement was made early in September that the new owners were investment holding firm InvestinMedia. According to a press release they bought the studios for £6.8m.

2016 January
It was confirmed the site had been sold for £16 million to property developer Quintain.

2017 September
Leased for a period of up to seven years to Wembley Park Theatre Ltd to use as an event space for live events.