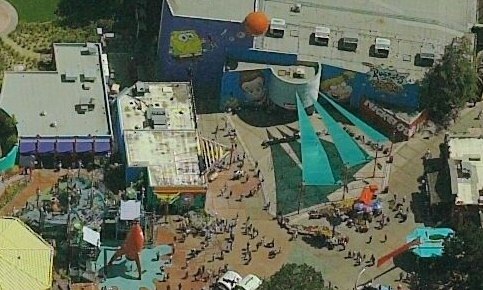 Based in the Panasonic Theater (photo above).

The show was replaced by the Rugrats Magic Adventure, and is now the home of Shrek 4D.

Get ready to be Green Slimed, because Universal Studios Hollywood and the “number one network for kids,” Nickelodeon, have joined forces to create a live interactive Gak-filled experience like no other, TOTALLY NICKELODEON.
Whether it’s dumping a TV dinner on a couch potato, crossing an aerial bridge, collecting sweaty socks, rescuing Alex Mack or building the better Good Burger — TOTALLY NICKELODEON is big fun… and you’re in control.
From the moment you step in to the all-new interactive TOTALLY NICKELODEON THEATER you’ll understand that it’s kids who have the upper hand with talk of Nicktoons, Gak, Rugrats and, of course, Green Slime.

An interactive adventure designed to appeal to the entire family, TOTALLY NICKELODEON features audience participation and team competition from Nickelodeon’s most popular television shows.
What is the secret ingredient in fast food? It’s people, it’s people.
Participants are chosen at random to help the entire audience select games and stunts from such classic “Nick” shows as Family Double Dare, Nickelodeon GUTS, Hey Arnold, The Secret World of Alex Mack, All That and Rugrats.
Two of Nickelodeon’s biggest stunts to be featured in the TOTALLY NICKELODEON THEATER are “The Pie Pod,” from the hit television show What Would You Do?, and “The Sliminator,” a new device specially designed to dispense gallons upon gallons of Nickelodeon’s trademark Green Slime onto volunteer guests.
In TOTALLY NICKELODEON, the pace is fast and the competition is fierce in a guaranteed fun-filled, one-of-a-kind experience every single time!

One of the highlights of this colourful show was the placing of two parents into carts and dressing them as hamburgers, before their offspring try to balance ketchup, tomato, lettuce and special sauce on their heads to complete the burger! (April 1999)