Spectacular laser, pyrotechnic and aquatic show which was the cornerstone of the Hollywood Nights celebration of Universal Studios Hollywood’s 30th Anniversary in 1994.

Performances took place in the Miami Vice arena (now Waterworld) during summer evenings. In the early days of CityWalk, management wanted a way to keep visitors in the area after dark. The backlot isn’t lit, so the tram tour has to stop at dusk. SpectraBlast was a show to rival Disney’s Fantasmic which had just opened, and was part of a package of evening entertainment along with Cinemystique: Illusions of the Night, an elaborate magic show featuring the Pendragons, street performers and a parade. 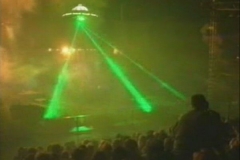 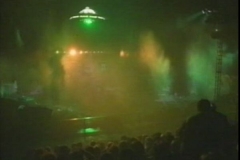 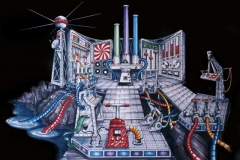 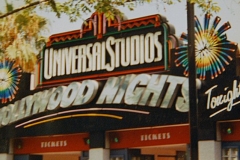 Information from Chairman Barnes, who appeared as Effects Jockey in Spectrablast

The main part of the set was a large “computer” with a “control desk” in front of it. The main character (The Effects Jockey) was based at this control desk. He wore combat boots, khaki cargo pants, a hot-pink jacket with elastic gathers at the waist and black wrist gathers. The costume was finished off by protective gloves, a black baseball cap and blonde wig, and a pair of safety goggles.

The story:
The Effects Jockey has created a device that will bring the movies to life. On an overhead screen, laser-graphics and movie clips dance around to the themes from popular movies (mostly Universal films!). Suddenly, the barrier between real-life and “reel” life ruptures conjuring up the “Hollywood Knights”, eight performers on stilts making them around 8 feet (2.4 metres) tall. They are all wearing armour made of film reels, lighting equipment and camera components, who enter the arena through the audience gangways. The overhead images change to those of silver-screen villains while a disembodied voice threatening trans-world domination booms apocalyptic prose over the PA system.
Just when things are looking bad, a full-size DeLorean car screams over the audience and “lands” just off stage. “Doc Brown” emerges from behind some shrubbery and explains how things might be put right. The Effects Jockey (EJ) moves to one of the consoles, flips a few switches, then starts to play a familiar 5-note melody. This evokes some intergallactic intervention embodied by a giant flying saucer which looms up seemingly from nowhere.  The ship hovers overhead shooting lasers and vanquishing the Knights back to their celluliod domain in a shower of pyrotechnics.

Secrets:
Since the show took place at night, both the DeLorean and UFO took advantage of the night sky.  The car was flown on wires.  The UFO was an internally-lit inflatible that was dangled from a blacked-out crane arm.  Even with all the lasers and pyrotechnics that was probably the most impressive effect because it was the simplest and you could not see the suspension at all.