This attraction was in what became the Special Effect Stages.

Where visitors get BIONIC™ training and perform some pretty unbelievable feats!

From “Inside Universal Studios”, 1978
The phenomenal television success of Universal’s “The Six Million $Man” starring Lee Majors and “The Bionic Woman” starring Lindsay Wagner has prompted their millions of fans to ponder “How do they do it?!”
They can find out the answer to that question at the unique SIX MILLION $MAN/BIONIC WOMAN TESTING CENTER on Stage 32.
Here’s where Universal has recreated – in spirit – the technology and the BIONIC capabilities of the popular TV show. And where visitors will learn the Top Secrets of BIONIC power. How it can enable them to leap incredible heights! Lift a trunk single-handed! Run 60 mph! And lots more.
These special effects are typical of the highly skilled art of making movie magic so real it makes a believer out of everyone! 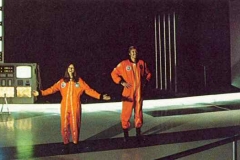 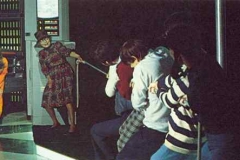 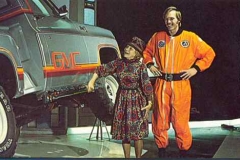 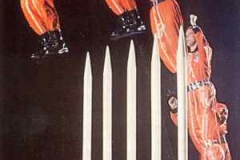 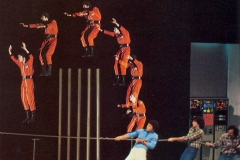 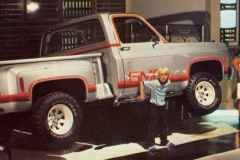 From “Inside Universal Studios”, 1979
Learn the secrets of bionics.
Two popular television characters who reside at Universal are Steve Austin and Jamie Sommers, “The Six Million $ Man” and “The Bionic Woman.” Their home is the Bionic Testing Center on Stage 32. This is their own lab where incredible advances are being made in the future science of Bionics. Universal has recreated – in spirit – the technology and Bionic capabilities of these two extraordinary heroes. Visitors are taught to perform amazing Bionic feats of strength. In a tug-of-war against impossible odds, a woman using one delicate hand is able to beat a 3,000lb. truck. And you can watch one of our own lab technicians take flight over a 12 foot high barrier. It’s all part of a day’s work at the amazing Six Million $ Man and Bionic Woman Testing Center.