The attraction was constructed in 2003 in the former Panasonic Theater which used to house the Star Trek Adventure, Totally Nickelodeon and many other shows over the years.
It’s closure was revealed online in May 2017, and on June 5th 2017, it was confirmed that this new attraction will be Kung Fu Panda, in a newly themed Dreamworks Theater.
Beginning where the first Shrek movie left off (and providing a handy transition into Shrek 2) this exciting “4D” movie attraction is beautifully themed. 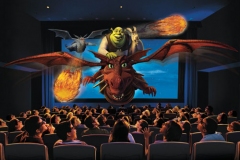 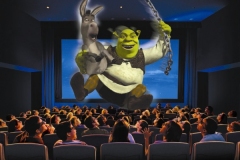 The preshow sequence sets up the show, introduces the characters for those who’ve not seen the film (is there anyone left who hasn’t?) and sets the location deep inside Farquaad’s castle.
The Three Little Pigs and Pinocchio are trapped in boxes. We can see the pigs’ eyes and as they wriggle and speak, we can see their boxes move! Then the Magic Mirror updates us on what’s been happening since the first movie.

The seats are pneumatically powered and can be made to pulse up and down (during the chase sequence). They have built-in water and air effects, along with a tickler which catches the back of the audiences’ legs during the spider sequence.

On either side of the screen there’s an area of wall where lighting effects are projected to complement the 3D movie. These include a waterfall, lava, spiders dropping and candies. The brightness (and effectiveness) of these is limited, however.

**Spoiler** At the very end of the movie, a fairy appears to fly out of the movie screen and straight into the auditorium wall, where she can be seen flailing as the lights come up and the audience leaves the theatre.

‘How does our 3D vision work?’

We see in three dimensions because we have two eyes. The brain is able to process the two slightly different images from our left and right eyes, and extracts “3D” information necessary to enable us to move around the world without bumping into things.

To reproduce the effect of seeing in 3D, the show designers had to be able to control what our left eye sees, and keep it separate from what our right eye sees. Two projectors are used to project the “left eye” image which is projected through a special filter called a polarising lens. The special “3D glasses” we wear when we see the film has a similar filter, so only our left eye sees the image that’s meant for it. Another pair of projectors project the “right eye image” so that it overlays the left eye image. Pairs of projectors are used In order to make the image bright enough. The projectors used are latest-technology digital “DLP” projectors which are extremely high quality.
Unlike Terminator 2:3D, there is no film involved in the Shrek movie. The movie is stored digitally, and replayed direct from hard disk. It’s the first fully digital theme park attraction – picture quality remains as good as the day the attraction opened. The projectors are much more expensive than the 70mm film projectors on Terminator 2:3D, but there is NO film replacement cost. When the Terminator movie print wears out or is scratched, it must be replaced at a massive reprinting cost.

‘Where can I see the movie again?’

The Shrek 3D movie (without any preshow or “4D” elements) can be seen on a special bonus DVD available with some copies of Shrek 2. It comes with coloured lens 3D glasses which reproduce the 3D effect on your home TV set. The effect is much better, of course, at the park.

The all-new multi-sensory “Shrek 4-D(TM)” attraction, a multi-media continuation of the “Shrek(R)” fairy tale, will be the first major attraction to be introduced simultaneously at Universal theme parks in Hollywood, Orlando and Japan.
The comic talents of Mike Myers, Eddie Murphy, Cameron Diaz and John Lithgow will return to give voice to the swamp-dwelling ogre, Shrek, his faithful chatterbox companion, Donkey; his bride, Princess Fiona(TM); and the vengeful ghost of Lord Farquaad(TM) in an all-new animated saga that will pick up the story where the Oscar(R)-winning feature film “Shrek” left off.
In the new tale, there is trouble once again in the faraway Kingdom of Duloc(TM). The tale begins as Shrek, Princess Fiona and their companion, Donkey set off for a honeymoon at the enchanting Fairytale Falls. But the ghost of Lord Farquaad, intent on taking his fearsome revenge, interrupts the honeymooners’ bliss. Soon, our fairy-tale heroes are face to face with ghostly foes and the audience is transported into the center of a thrilling adventure packed with such fast-paced sequences as an aerial dogfight between fire-breathing dragons and a steep plunge down a 300-foot deadly waterfall.
With 15 minutes of all-new 3-D animation, “Shrek 4-D” will bridge the narrative between “Shrek,” “the greatest fairy-tale never told,” and the upcoming sequel from DreamWorks Pictures. The “Shrek” saga continues with spectacular visuals and multiple special effects yet to be seen, heard and felt in a “4-D” attraction.
In announcing the new attraction, Tom Williams, chairman and CEO, Universal Parks & Resorts said: “Universal theme parks are committed to presenting attractions that break new ground in live entertainment and to working with the most creative minds in our industry. The new “Shrek 4-D” attraction is an example of the tremendous rewards to be realized from working with a creative powerhouse such as DreamWorks.”
Guests will be ushered into a pre-show chamber where they’ll be greeted by the late, vertically challenged Lord Farquaad himself, who, in his first posthumous appearance, will inform guests of his ghostly scheme to haunt Shrek, Princess Fiona and Donkey. The five-minute video preamble will prepare guests for their entry into the main theater and the wild adventure to follow.
Once settled in specially designed seats in the main auditorium, guests will don OgreVision glasses and will be transported to the fairy tale realm of Duloc, as the screen and the theater itself come alive with the tale of the Shrek-Princess Fiona honeymoon adventure. Surprising sensory elements will help propel the narrative experience through seats capable of both vertical and horizontal motion equipped with tactile transducers, pneumatic air propulsion and water spray nodules.
“Shrek 4-D” will mark the first animation to be created for a theme park by the animation wizards at PDI, the creators of “Shrek,” as well as the earlier computer animated hit “Antz(TM)”. The addition of three-dimensional depth to the animation and the creation of in-theater effects by attraction designers at Universal Creative will be parts of the new OgreVision multi-sensory experience.
Members of the team responsible for “Shrek” and for the upcoming DreamWorks Pictures sequel will also create the new animation. David Lipman, who served as co-executive producer for “Shrek,” and is producing “Shrek II, will produce the theme park attraction.
In Universal Studios Florida, Universal Studios Hollywood and Universal Studios Japan, “Shrek 4-D” will be housed in its own castle-like building. When the attractions open in Summer 2003, as many as 1200 guests in each park
will be able to experience the “Shrek 4-D” attraction hourly.
Universal Studios Hollywood and Universal Orlando are units of Universal Parks & Resorts. Universal Parks & Resorts conceives designs, constructs and operates Universal’s widely diversified themed entertainment businesses,
location-based entertainment endeavors and leisure activity enterprises throughout the world.

Universal Parks & Resorts is a division of Vivendi UNIVERSAL Entertainment ( www.universalstudios.com ), the film, television and recreation entity of Vivendi Universal, a global media and communications company.

“Shrek 4-D,” a multi-media continuation of the Shrek fairy tale, reunites the comic talents of Mike Myers, Eddie Murphy, Cameron Diaz and John Lithgow who return to give voice to the swamp-dwelling ogre, Shrek, his faithful chatterbox companion, Donkey; his bride, Princess Fiona™ and the vengeful ghost of Lord Farquaad™ in an all-new animated saga that will pick up the story where DreamWorks’ Oscar®-winning feature film Shrek left off.