Steven Spielberg named the notoriously unreliable mechanical shark used in the production of JAWS “Bruce” after his lawyer at the time.
This Bruce replica from the movie JAWS was on display on the upper lot known as the Visitor Entertainment Center from 1975 to 1990. A dark day in the year of 1990 saw Bruce removed from the park and replaced by a shark not seen in any JAWS movie.
According to the current owner, the shark was sitting in the back lot ready for the dumpster or the sledgehammer when it was offered to him. Bruce can now be seen peeling away on top of two steel poles soaring above the ‘U Pick Parts’ Junkyard in Los Angeles, USA. Though it is a copy, it is the last remaining shark made from the original molds. 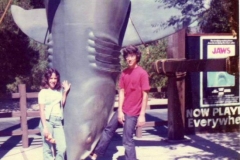 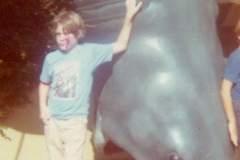 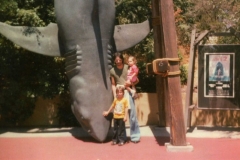 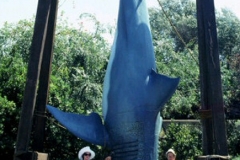 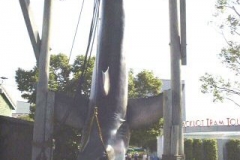 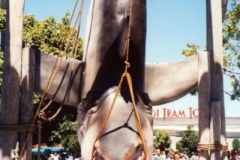 After Bruce (see above) was removed in 1990, a new Jaws shark was installed on the docks next to the Warlord Tower. In 2000 or 2001 it was relocated in front of the studio tour entrance where it remained until 2014. It was removed when the Hollywood Cantina and Doc Browns Chicken was removed for the construction of Springfield. 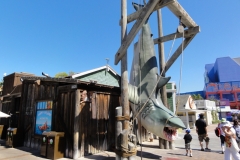 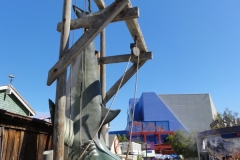