Marvel Mania was a stunningly themed restaurant environment where you felt like a Marvel Comics superhero. Bold designs throughout, interactive video screens and a total themed experience meant many diners were converted to being comic fans and many existing Marvel fans were in heaven.
The restaurant was planned to be the start of a chain similar to Planet Hollywood, however, due to unfortunate timing (it launched just as the Planet Hollywood bubble burst) in September 1999, Marvel were forced to close the restaurant arm of their business for financial reasons.
The main Marvel Mania building only had it’s paintjob replaced in 2007 when it was rethemed as Stage 13. The entrance to the restaurant is now the entrance to the Universal House of Horrors walkthrough, and the walkthrough element of that attraction uses the former restaurant building fully. Part of the structure was formerly the Victoria Station restaurant.

From Studio Guide leaflet, 1999:
“MARVEL MANIA: Enter Marvel’s Universe! A full service restaurant with outrageously great American food, high energy cocktails, out of this world souvenirs and a fabulous “Holiday Feast” menu to choose from. Truly the most unique experience on this planet” 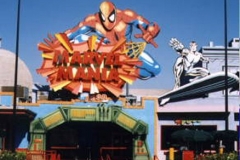 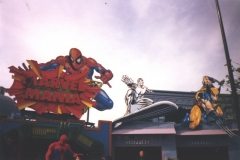 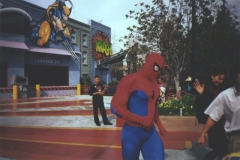 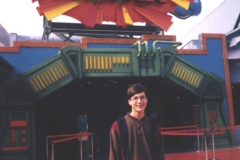 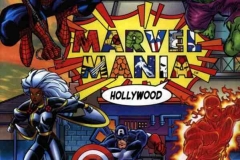 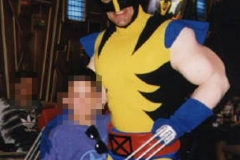 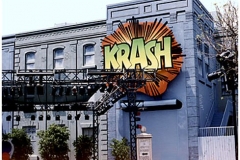 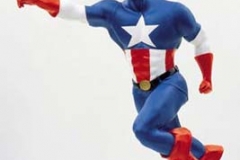 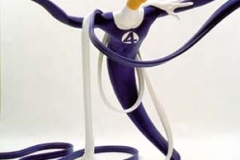 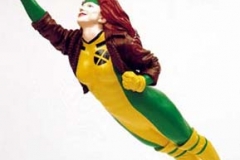 From Press Release, 1998
A “Marvel-ous” Place to Eat: Southern California restaurant goers can now tell their waiter to “Make mine Marvel” when they go out and eat at Marvel Mania at Universal Studios in Universal City. Owned by Marvel Comics, the theme restaurant is patterned after other successful eateries like The Hard Rock Cafe and Planet Hollywood, and offers fans a wide variety of comic-related activities and delicious food.
Highlights include a mini-museum, gift shop, game room and bar. Fans can purchase everything from videos and T-shirts to comic book art and mouse pads, all featuring classic Marvel comic heroes.
Favorites on the Marvel Mania menu include various “Stanwiches” (named after Marvel Founder and comic book legend Stan Lee), Captain America burgers and Fantastic Four Cheese Pizza. The servings are generous and will satisfy even the heartiest of super-hero appetites. Kids of all ages also will enjoy watching television series and films based on Marvel characters on big-screen TVs while they eat.
The younger set will enjoy seeing their favorite Marvel super heroes in person as costumed characters make the rounds posing for pictures. Thankfully, no super villains have yet been sighted!