Short-lived walkthrough exhibition to celebrate the release of the Aardman animation movie.

It opened in the former Marvel Mania restaurant building, and closed at the start of November 2000 to allow Grinchmas event to take over the building Christmas 2000. The entrance and exit was on the first floor of the building – only that floor was used.

The start of the exhibition featured set models and character armatures (animation skeletons) used in the making of the film, followed by a ‘maze’ themed around a chicken coop and giant pie-making machine (“Chickens go in…pies come out!”).

First of all you enter the chicken coop – Mac and Ginger appear as 2D cutouts and a huge Mr Tweedy head pokes into the coop saying ‘I know these chickens are organised’.
Continuing through the maze, there’s a tunnel to crawl through to get out of the coop (with an option to continue on the path if you don’t want to go through the tunnel!) which leads into the pie-making machine.  One memorable part featured giant hanging rubber vegetables and a bubble machine which you have to make your way through. You have to also survive the oven and escape out of the hen house. Once you’ve exited the hen house, you are introduced to more props from the film. 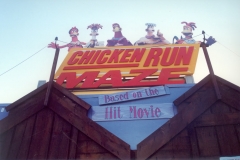 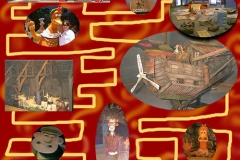 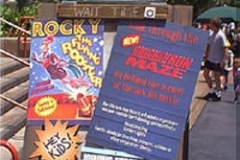