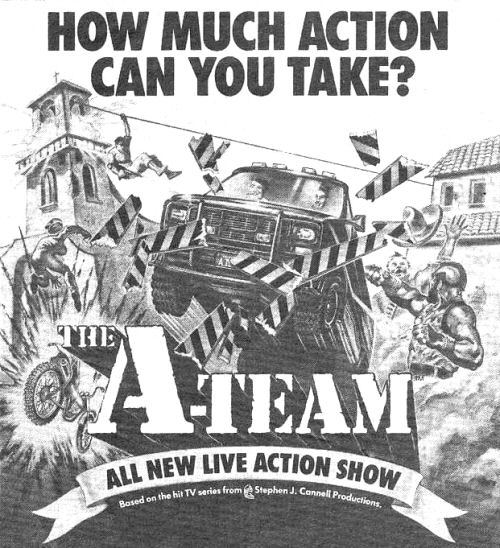 Newspaper advert for The A Team Live Stunt Show

The first show in the arena currently the home of WaterWorld. The show was written by John Peale, Gary Goddard and Richard Hoag of the Landmark Entertainment Group and was produced by Peter Alexander.
Stage Direction and Stunt co-ordination was by James B. Winburn.

One of the actors who played “Mr T” in the live show is J.J., who continued to work for Universal as a tram driver until his death in February 2014. See also The A Team TV showpage.

The show ran until 1987 when it was replaced by the Miami Vice Action Spectacular.

THE A-TEAM.
They crash, they burn, they blow up. And they always walk away winners.
But if you think their stunts look wild on television, wait until you see how we recreate what they do at Universal Studios.
It’s the spectacular new A-Team Live Action Show. Our fifth new show in the expanded Entertainment Center.
You’ll see incredible stunts like leaping vans, controlled crashes, roll-overs, artillery duels, gunfights, motorcycle jumps and high explosives – all demonstrated and explained to you in our new arena.
It’s an awesome display and it’s all just part of a full day of family fun at Universal Studios.
The A-Team Live Action Show.
If you can take it, they can sure dish it out.