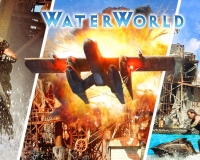 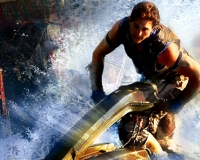 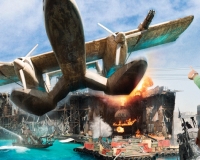 Location: Arena adjacent to Universal Amphitheatre.
Timeline:
1984 – 1988: A Team Live Action Stunt Show
1989 – 1995 – Miami Vice Action Spectacular
October 1994 – Preproduction meetings
January 1995 – Construction starts in the arena
February 1995 – Atoll construction starts
July 1995 – The pool is filled with 1.4 million gallons of recycled water for three intensive months of rehearsal.
Autumn 1995 – Show opens (planned opening, announced in May 1995 was October 23 1995)
24 Jan 2006 – 7 April 2006 – Show closed for refurbishment (repainting, remodelling of the set)
2007 – Show Control system refit (see below)
March 2014 – The show closes for annual refurbishment and it’s announced that the previous production company has been removed from the show. This includes some of the crew members, who are to be replaced with a new team.
April 2013 – The show re-opens after some minor re-working, and is now operated by Action Horizons, a company formed and run by professional stuntmen. They already were responsible for running the Universal Studios Singapore version of the WaterWorld show.

The Making of WaterWorld

Work on the attraction started in October 1994, during production of Waterworld the movie. The team from Universal Studios Hollywood were searching for a replacement for the Miami Vice Stunt Show which was starting to show it’s age. Project Manager Norm Jahn was called to Hawaii to see the massive sets for the movie.

Only Deacon and Helen have live radio microphones – any other voices are recorded.

The WaterWorld tank has to be drained periodically for maintenance and repairs. Thanks to Skillz Entertainment for these photos from the year 2000! 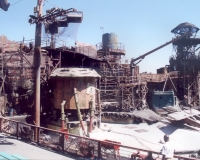 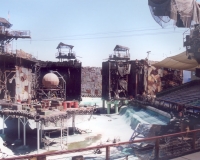 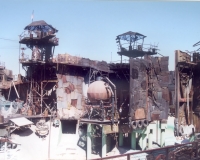 Another refurbishment in 2006 involved draining the tank and applying a new blue paint job – thanks to David Crown for the photos. 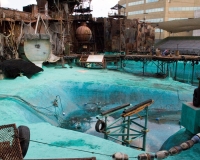 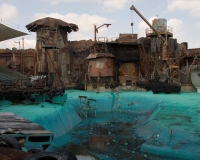 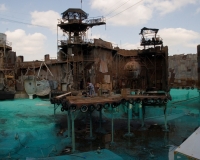 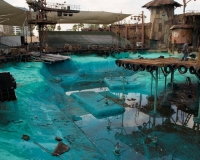 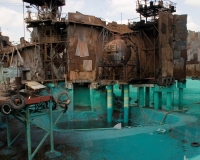 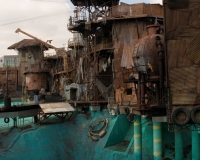 The music played throughout the performance based on themes from the film score by James Newton Howard. Thanks to Josh James for the following information listing which parts of the movie soundtrack are used in the show, listed in order of their appearance in the live show:

50 x EAW and Panasonic/Ramsa speakers forming a 50,000 Watt sound system. Scenic housing for the speakers was built by Lexington Scenery as part of the set design.

In the current sound design, JBL and Tannoy speakers are used.

The lead actors wear radio microphones which relay their speech through the sound system. The sound stage manager is in the control booth at the rear of the auditorium. He or she plays back the pre-recorded music tracks and is also responsible for monitoring the radio microphones to ensure that everything is working and that the actors are OK. If there are problems with the show, the sound stage manager can talk to the actors through on-set speakers to tell them what\’s wrong and advise them on what to do. The sound stage manager also triggers the live “special effect” sounds (punches, explosions etc) which punctuate the show but cannot be accurately timed with a recorded soundtrack.

There are 63 pyrotechnic effects for each 20 minute WaterWorld performance!

Safety is obviously of paramount importance – there are a number of safety devices built into the set which prevents dangerous effects (particularly pyrotechnics) from taking place if the conditions are not right. There’s an electronic eye sensor across the main walkway which tells the show control computer that a Mariner has passed a certain point, which means the pyrotechnic explosion can be safely triggered.

There are also wind sensors at high level around the arena which again prevent certain effects from happening if the wind speed is too high.

Every “launch” effect (the Mariner’s first entrance, the jetski and water-skiier through the wall etc) have technical operators with full view of the performers who press an “enable” button when all is set. When the show control computer gives the command to countdown and then launch, nothing will happen unless the enable button is being pressed, and other automatic safety checks come back with positive results. There are also emergency stop buttons which can be pressed if there are any problems.

As the aim is to continue the show wherever possible, there are alternatives for most of the technical effects which are put into action if the effect cannot be achieved for any reason. These ensure that the audience are usually unaware there is a problem and the show keeps running.

The system was replaced in 2007 (after 12 years of operation). This video documents the upgrade project.

There are more than 50 stunts during the show, needing a wide range of skills from jetski jumps, via high wire work to high falls into water.

Jetskis
The specially modified Jetskis used in the show are Kawasaki 550s, Kawasaki X2s and Kawasaki Supersports. They’ve been fitted with extra bilge pumps and have had the motors modified to cope with the heavy usage on WaterWorld. The numerous tyres around the tank edges are to protect the sets (and jetskis and actors) from damage if targets are missed. 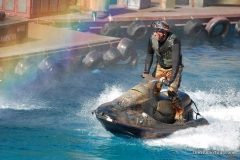 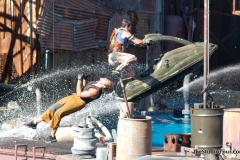 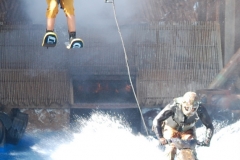 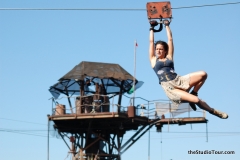 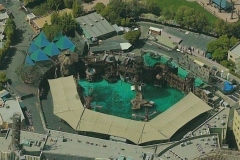 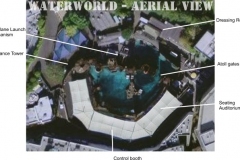 The backstage area contains a continuation of the water tank, and areas for the cast and crew to relax, change into costume, and eat between shows.

Cast Photos over the years 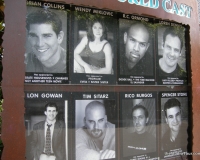 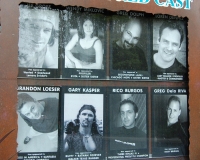 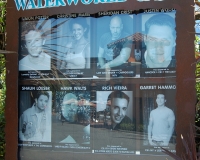 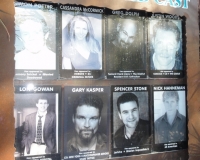 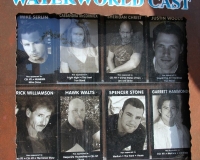 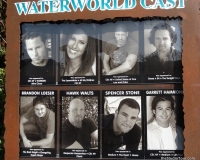 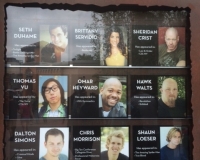