This popular shopping and entertainment area was built it 1993 and expanded in 2000. It provides a link between parking areas and the theme park, gives customers an opportunity to spend more money (and eat and shop) after leaving the theme park, and gives local residents a buzzing environment to spend dollars and see movies.

The whole area (along with parking structures and service areas) can be used by production companies for filming.

During the 2000 expansion, an outdoor video screen and lighting system was added to CityWalk.

“Since 1993, CityWalk has boosted the city’s rhythm through a foundation built on providing memorable entertainment experiences.  With a series of dramatic enhancements currently underway that includes the introduction of new restaurants, shopping experiences, visually aesthetic design features and the completed state-of-the-art movie theatre renovation, the spotlight shines brightly on CityWalk as it continues to resonate as one of L.A.’s most influential lifestyle centers.” from 2016 press release 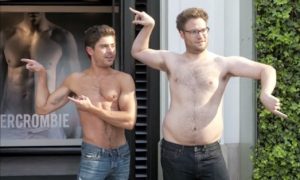 Zac Efron and Seth Rogen at CityWalk (still from Neighbours, 2014)

Stadium-style seating was introduced in 2007, when AMC Loews took over operation of the facility.
The cinemas were upgraded in 2016 to Dolby ATMOS immersive surround sound and Christie RGB laser projectors.
In April 2017 the cinema was rebranded Universal Cinema, and was officially opened on 21 April 2017.

April 20, 2007 — Universal CityWalk Cinemas celebrates its sweeping top-to-bottom re-launch with an unprecedented “Open House” at the movies offering guests a free day of movie-going complete with free popcorn and free soft drinks and introducing audiences to “The Best Movie-Going Experience in L.A.” on Thursday, May 3, beginning with the first late-morning screenings and continuing through the last regular showtimes of the day.
Guests will enjoy a free “first look” at the Universal CityWalk Cinemas’ (CityWalk Stadium 19) comprehensive re-do, featuring technically advanced screens, a sophisticated, state-of-the-art sound system, an “eye-popping” interior and exterior design and the widest, stadium-style seating available in any U.S. theatre.
“Open House” guests will find lavishly remodeled theatres and will be seated in custom-made, ergonomically-designed stadium-style “rocker seats,” measuring 26″ in width with first-class spacious leg room. They’ll watch movies on new, wider, curved wall-to-wall movie screens, and enjoy perfectly balanced digital surround-sound systems.
Living up to its billing as “The Entertainment Capital of L.A.,” Universal Studios Hollywood celebrates summer 2007 with the “New CityWalk,” featuring a lively mix of new dining choices, a collection of contemporary retail favorites, an exciting range of entertainment that includes free concert performances and free outdoor movie screenings as well as the ever-popular mechanical bull-riding at Saddle Ranch Chop House, virtual NASCAR racing, salsa dancing at the Rumba Room, and the newly revitalized 18-screen and IMAX theatres.

For film buffs, CityWalk has long been the epicenter for fans seeking an environment that matches the excitement of their favorite blockbuster movies. As part of if its bold revitalization, CityWalk now elevates the movie-going experience to new heights as the 18-screen and IMAX AMC Theatre updates with the most technologically advanced sight and sound achievements.  A complete remodel of the split level structure includes the installation of deluxe recliner seats in 18 theatres—the equivalent of those found in Hollywood screening rooms—making every seat, the best seat in the house.

The Director’s Lounge Cocktail Bar—an all-new dedicated and stylish second level retreat, flanked by the upper level theatres—adds a charismatic new dimension to the space as it blends high-tech elegance with chic sophistication for casual pre- and post- movie-going fun. Beverages served at the Lounge can also be taken into the second level theatres.

Additionally, movie-goers can enjoy $5 Movie General Parking with the purchase of a movie ticket.

Other Entertainment at CityWalk

As well as eating and shopping, there are various entertainment venues at CityWalk.