This new dark ride-style attraction has replaced Backdraft and the Special Effects Stages on the Lower Lot. The shells of the historic soundstages which housed those attractions remain (Stage 30 and Stage 32), but the interiors of the stages have been totally replaced. The ground-breaking attraction uses ride vehicles similar to those in The Amazing Adventures of Spiderman at Universal Orlando, and features very high quality digital 3D projection and a number of practical special effects. 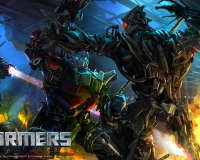 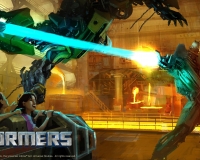 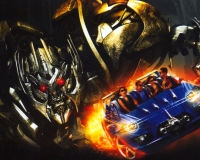 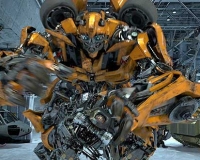 Comparison with The Amazing Adventures of Spiderman

This signature attraction at Universal Studios Islands of Adventure in Orlando, Florida has a much larger show building than the two stages which housed Backdraft and the Special Effects Stages. The Spiderman show building appears (from Google Maps) to be around 200 feet by 200 feet, whereas the stages at Universal Studios Hollywood seem to be around 130 feet x 150 feet. The show buildings for ‘Revenge of the Mummy’ are around the same in both locations, despite the ride in Orlando having more show elements.

Given the size of the building, it seemed unlikely that the attraction could be as complex as the Spiderman attraction in Orlando, but as technology has improved, and the Transformers attraction will be using high-definition digital 3D projection rather than the more complex and space-intensive film-based system in Orlando, anything is possible! Recent construction photographs have also revealed the vehicle track system appears to be operating on two levels, which gives a much larger floor surface area than in Orlando. The completed show building in Singapore is very high in comparison to the former soundstages in Hollywood, but a great deal of excavation below ground level has taken place in Hollywood, so the finished height of the space inside the buildings will be comparable.

Behind the Scenes Secrets

As noted above, the building containing the attraction is quite small, but the ride feels larger than The Amazing Adventures of Spider-Man.
To achieve this, the attraction designers have pulled a few really neat tricks.
The attraction actually takes place on two levels. There are two points where your ride vehicle enters an elevator and travels up to the top floor of the building, and then back down again just before the end sequence and unload. The elevators are undetectable and super-smooth, because the projection moves in sync with the motion of the lift. (Despite riding it six times, I failed to spot the lifts at all!). 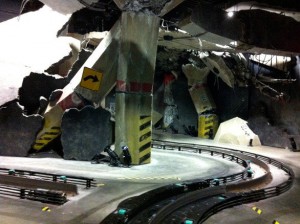 To achieve this there are at least two points in the ride where your vehicle movement changes, according to which elevator is free next. There are four elevators in total, in two positions.

This photo (right) shows one of the track switch positions, just before an elevator.

Each ride vehicle has 12 seats and an on-board computer and sound system which receives instructions from the main ride control system. 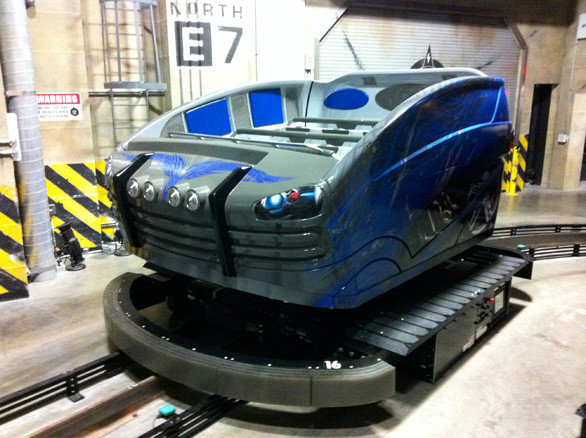 There are 11 Transformers characters featured in the ride:

This modified building can be found just outside the main Transformers Show Building, opposite The NBC Universal Experience. 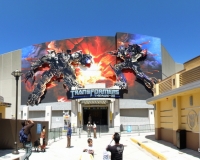 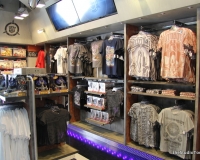 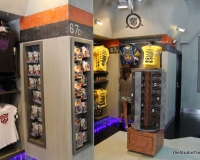 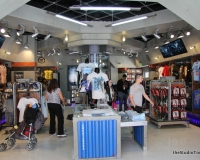 April 2010 – Backdraft and the Special Effects Stages have closed, and Transformers logo and artwork is up. There’s a large amount of construction activity visible on the roof, and we assume there\’s lots more going on inside the buildings.
July 2010 – The stages are now merely shells – the front wall and roof have been removed.
April 2011 – The two level interior layout is finished, and it looks like ride tracks are being installed.
September 2011 – Concrete steps into the attraction and steelwork is complete on the front of the show building.
December 2011 – The comic-style artwork at the front of the show building is completed.
April 2012 – Two years after construction started, the attraction is complete. Final testing takes place before the Annual Passholder opening on May 4th. 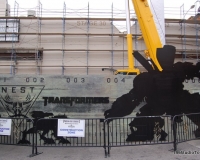 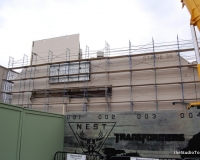 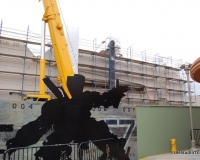 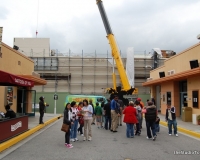 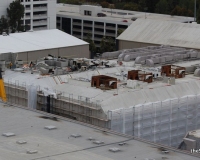 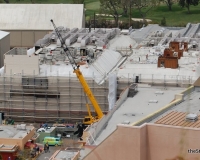 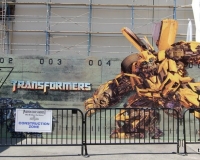 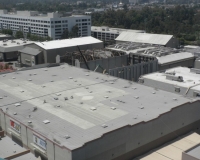 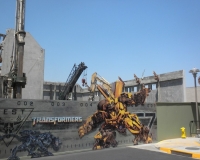 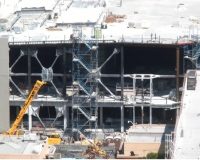 Transformers, the electrifying blockbuster celebrated for its multi-generational appeal, inventive storyline, spectacular action sequences and special effects, will now be developed as a new theme park mega-attraction in a partnership between Universal Parks & Resorts, Hasbro, Inc. and DreamWorks Pictures.
The attraction will fuse 3D-HD media, mega special effects and stunning robotics with a ride system that will transform perceptions of theme park experiences. The rides are scheduled to make their debuts in early 2011, first at Universal Studios Singapore and then at Universal Studios Hollywood. In “Transformers” Earth’s humans are caught in the middle of an intergalactic war between the friendly Autobots and the evil Decepticons, which are able to change into a variety of objects, including cars, trucks, planes and other technological creations.
Tom Williams, Chairman and CEO, Universal Parks & Resorts, said: ‘Transformers’ will be a jewel in our collection of world-class rides based on great movies. We’re thrilled to be collaborating with Hasbro, DreamWorks, director Michael Bay and the film’s executive producer, Steven Spielberg, who has been responsible for so many of our signature rides and attractions.” Steven Spielberg serves as creative consultant to Universal Parks & Resorts and has worked closely with the company in the creation of some of the world’s most innovative theme park attractions. Those attractions include Jurassic Park-the Ride, a featured attraction at UP&R parks in Orlando, Hollywood and Japan, the E.T. Adventure at Universal Orlando and Universal Studios Japan, and the “War of the Worlds” sets at Universal Studios Hollywood.
Larry Kurzweil, President and Chief Operating Officer, Universal Studios Hollywood, said ‘Transformers’ represents a perfect match for our theme park: an exhilarating blockbuster with a great story, clever humor, non-stop action and flawless special effects. It has all the elements necessary to become one of the world’s most exciting theme park rides and a centerpiece attraction at Universal Studios Hollywood, The Entertainment Capital of L.A.”
“We are thrilled to be working with Universal Parks & Resorts and DreamWorks to create this Transformers attraction because we believe it will deliver an ultimate one of a kind immersive Transformers experience for our fans around the world!” said Brian Goldner, President and CEO of Hasbro, Inc.
Tan Hee Teck, Chief Executive Officer of Resorts World at Sentosa, the mega resort that is home to Universal Studios Singapore, said: “It is great that Asia will be the launch pad for the first Transformers attraction. Transformers was introduced in the United States in 1983 but traces its roots to Asia. Optimus Prime, Bumblebee and Megatron are familiar names to Asian audiences, who grew up with the robot toys and love the movie. When Transformers opens in Universal Studios Singapore in 2010, it will be the first of its kind in the world. We may see a surge of Transformers mania.
Director Michael Bay and Executive Producer Steve Spielberg presented “Transformers” in 2007. “Transformers” broke box office records on its way to gathering worldwide gross revenues of over $706 million — the highest non-sequel gross of any movie in 2007 — and three Academy Award nominations. The sequel, “Transformers: Revenge of the Fallen,” is scheduled to be released by Paramount Pictures in the U.S. on June 26, 2009.
“Transformers” is a Paramount release of a DreamWorks Pictures, Paramount Pictures presentation, in association with Hasbro, of a di Bonaventura Pictures production. Produced by Lorenzo di Bonaventura, Tom DeSanto, Don Murphy, Ian Bryce. Executive producers, Steven Spielberg, Michael Bay, Brian Goldner, Mark Vahradian. Co-producers, Allegra Clegg, Ken Bates. Directed by Michael Bay. Screenplay, Alex Kurtzman, Roberto Orci. Story, Alex Kurtzman, Roberto Orci, John Rogers. Starring Shia LaBeouf, Tyrese Gibson, Josh Dumael, Anthony Anderson, Megan Fox, Rachael Taylor, John Turturro and Jon Voight.

Thanks to sharpproductions for this video

Opening Ceremony of the Transformers Ride at Singapore