First seen at Universal Studios Hollywood Christmas 1999, the Grinchmas celebration brings the much-loved characters to life in a Universal-style celebration of the festive season.

December 2008 Information:
Make your Holiday Season a little mischievous and a Whole Lot of Fun with the new Grinchmas at Universal Studios Hollywood. 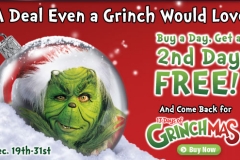 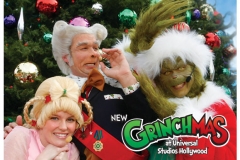 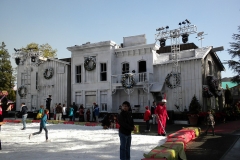 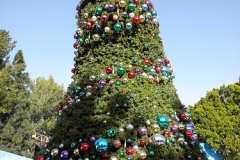 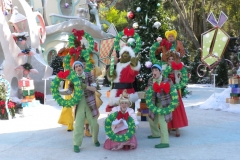 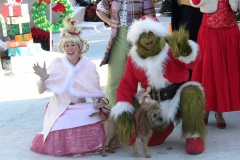 A Universal Studios Hollywood celebration of everything Who-vian, Grinchmas takes the delightfully off-kilter residents of Dr. Seuss’ Who-ville — including the Grinch himself — off the screen and brings them to life for park guests.

At the Who-ville Who-bilation area, singing and dancing Who-villians teach the Grinch the true spirit of Christmas. Young revelers can slip and slide down the 41′ tall, icy Mt. Crumpit Snow Plummet sledding hill, or meander through The Grinch’s Cave Maze, where prodded on by the voice of the Grinch, they’ll see the fanciful original prop furnishings from the movie, interact with the Grinch himself and enjoy other surprise features throughout the enormous and whimsically constructed cavern.

Who-ville Who-bilations will abound nightly, with a singing and dancing cast of Who-villians, a nightly tree-lighting ceremony, appearances by the Grinch’s faithful dog Max and real snowstorms. Guests can snack on such Seuss-ian treats including Mt. Crumpit Crispy Treats, Grinch cookies and, of course, green eggs and ham, served each morning for breakfast.

The Grinchmas celebration continues aboard the famed Studio Tour, where guests will see the original Who-ville sets, among the most imaginative and elaborate ever constructed on Universal’s historical back lot. At Universal CityWalk, a “walk-through” display sponsored by Kodak will provide guests with a unique Grinch photo opportunity.

In a special offer made available as part of the Grinchmas program, guests who purchase a regularly priced admission ticket during the Grinchmas celebration will also receive a special three-month park admission pass valid Jan. 1 through March 31, 2001. Admission to Universal Studios Hollywood is $43 for ages 12 and older, $32 for ages 3 to 11, children under 3 are free, tickets for ages 60 and above are $37.