A new ride for 2014, taking the place of Terminator 2:3D at Universal Studios Hollywood. The ride building has been extensively remodelled to incorporate two large auditoria and an extensive pre- and post-show area. 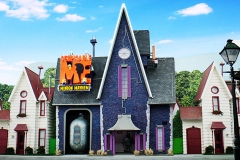 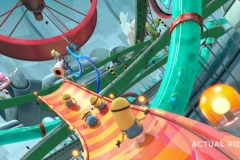 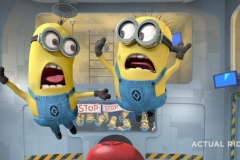 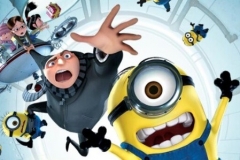 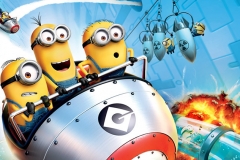 From the Universal Studios Hollywood website, 2014:
Experience Despicable Me Minion Mayhem and join Gru, his daughters and the mischievous Minions on a heartwarming and hilarious 3-D ride. Start your adventure in Gru’s home, where you’re recruited for his latest scheme – one where you’ll become an actual Minion.
After making it through “Minion training” things don’t go as planned! Within moments, you’re launched into an unforgettable trip through his super-villain laboratory.
The laughs keep coming after the ride with an interactive, Minion-inspired dance party.
Then, visit a re-creation of the first film’s memorable seaside carnival, “Super Silly Fun Land,” an all-new, over-the-top outdoor family play zone inspired by the lively experience shared by Gru and his three adorable girls: Margo, Edith and Agnes.

Specs:
When: Opening April 12, 2014
Where: The attraction is based in the former Terminator 2:3D show building on the Upper Lot
Auditorium: There are two auditoria to cope with a large guest capacity.
Voices: All the character voices in the attraction were performed by the original stars of the hit movie, Despicable Me.
A dedicated team from Chris Meledandri’s Illumination Entertainment worked alongside Universal Creative to create a hilarious new storyline and animation for the ride experience and pre-show queue. 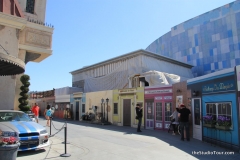 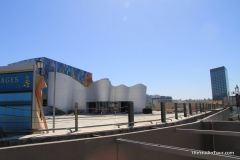 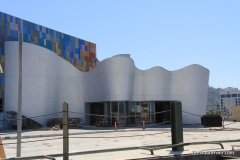 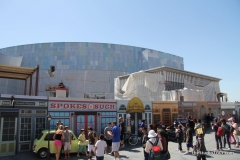 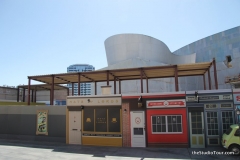 This is a short excerpt from the beginning of the ride – this footage is not in 3D, and cannot show the interactive and motion elements that guests (sorry, trainee minions) will experience.

The main body of the queue area is the same as the Terminator 2: 3D line until you arrive at the top of the ramp. The building has been reconfigured to accommodate two simultaneous preshow sequences and two auditoria, instead of the single layout for T2:3D. 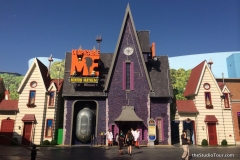 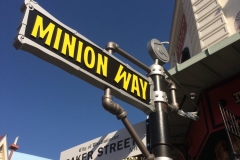 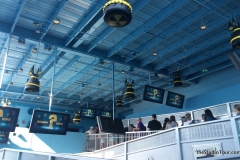 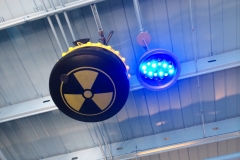 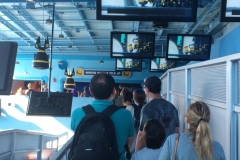 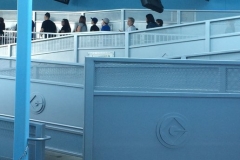 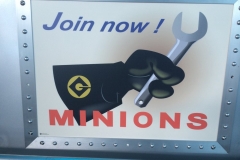 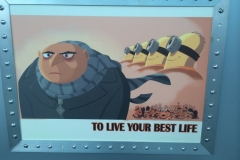 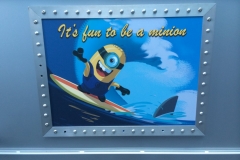 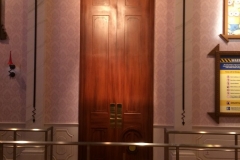 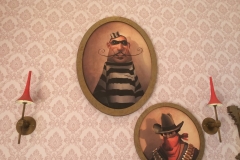 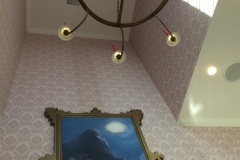 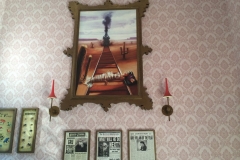 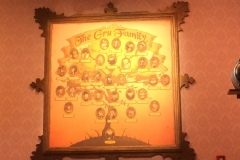 ORLANDO, Fla. (May 19, 2011) – Universal Orlando Resort today announced that its newest attraction will be based on Universal Pictures and Illumination Entertainment’s blockbuster 3-D-CGI feature “Despicable Me,” bringing minions, mayhem and a whole new level of 3-D family fun to its guests. The “Despicable Me” experience will replace the Jimmy Neutron attraction at Universal Studios Florida.
Universal also announced that The Amazing Adventures of Spider-Man, one of the greatest attractions in theme park history, will be completely reanimated in 4K digital high definition – once again redefining the theme park experience.
Both will open in 2012 and are being developed by the same award-winning Universal Creative team that has brought all of Universal Orlando’s spectacularly themed attractions to life. Both will utilize brand-new, highly sophisticated Infitec 3-D projection systems designed to make the experience sharper, clearer and more “real” than ever before.

DESPICABLE ME
With a worldwide gross of more than $540 million, 2010’s “Despicable Me,” from directors Chris Renaud & Pierre Coffin, is the sixth most successful film that Universal Pictures has ever distributed. It is now the 10th-biggest animated film in U.S. history. The 3-D animated adventure thrilled audiences across the globe with its outrageous humor, endearing characters and compelling storyline – all of which guests will be able to experience exclusively at Universal Orlando in 2012.
“Despicable Me” will become the first-ever Universal animated film to be transformed into a theme park experience. The Universal Creative team is working closely with producer Chris Meledandri, the founder of Illumination Entertainment, to create all-new animation for an all-new “Despicable Me” adventure that places guests right in the center of the action.
Gru, one of the world’s greatest super-villains, is bringing his high-tech empire – and his three adopted daughters – to Universal Studios, and he is looking for all the help he can get. First, he will transform guests into an army of mischievous, scene-stealing minions. Then he will train them. And that kicks off an unforgettable ride experience that creates a hysterical mix of chaos and family fun.
Guests will:
laugh as they embark on an entirely-new, high-tech 3-D digital adventure with their favorite characters from the film – Gru, daughters Margo, Edith and Agnes, and of course, Gru’s not-so-bright pit crew, the minions
marvel as they explore Gru’s lair and descend into his secret lab
shriek as the entire family is transformed into minions
celebrate as they are swept into a first-ever, minion-inspired, interactive dance party where they can show off their best moves

The ‘Despicable Me’ attraction is the latest example of how we tap into pop culture’s most compelling stories and turn them into extraordinary theme park entertainment,” said Mark Woodbury, president of Universal Creative. “This is a perfect fit for Universal Orlando, and we can’t wait to bring this one-of-a-kind experience to life.”
“As we write, design and animate our films at Illumination, it is our singular goal to bring to life endearing and, hopefully, enduring characters,” said Chris Meledandri. “With the creation of next year’s ‘Despicable Me’ attraction at Universal Orlando, audiences will be able to immerse themselves in Gru’s world for many years to come.”