On the 30 March 2007 a brush fire was started in the Hollywood Hills to the east of Universal City. Although no damage occurred, the fire got within 50 feet of the Toluca Hills residential complex to the east of USH. It was caused by two teens setting off fireworks in the dry brushwood. There had only been 2 inches of rain since July 2006, so it was a disaster waiting to happen. Luckily (due to speedy work by firefighters and helicopters) the fire was brought under control and no property was damaged.
The smoke dominated the skyline for most of the day, and there were fears that the Hollywood sign might be at risk, but this was not the case. Most disruption was caused by thick smoke which caused traffic to slow down on freeways and meant most buildings in the area had to shut down their air-conditioning.
Staff at Universal Studios were fully aware of the fire, but it was sufficiently far away from the property to not disrupt any attractions or activities. 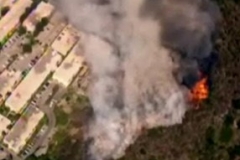 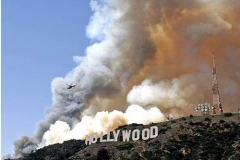 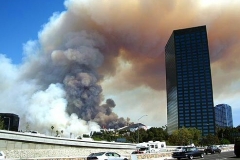 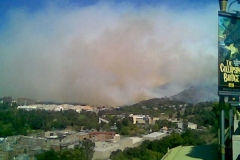