Above: Colonial Street as seen in 2003 (from ‘Ride the Movies’ promotional video)
The Colonial Mansion, Church and School buildings seen in the video were removed to accommodate Desperate Housewives in 2005.

One of the most popular places to shoot on the backlot, Colonial Street has a long history. The location is now more commonly known as Wisteria Lane.

Production ended on the 8-year run of Desperate Housewives in April 2012. As of May 2012, the Colonial Street area is having a makeover to get it back to a more generic neighbourhood so it can once again being appearin in a number of shows and productions with no echoes of Wisteria.
When the show was in production, the Studio Tour trams rarely accessed the street during the week as it was in constant use, so real fans had to visit on weekends or occasionally on rainy days to drive down the street.

May 2012: The street has been resurfaced, and a lot of white fencing (and wisteria) has been removed.

(NB: Animal House was NOT shot on Colonial Street, but Delta House (a short-lived TV series follow-up), was).

1946 – 1963
The story begins in 1946 when a few houses began construction on Stage 12 for So Goes My Love. After the movie wrapped, the sets were put into storage, until 1950, when the houses (along with other house sets built from stock units) were moved outside to the north edge of the backlot (the former site of River Road) and were christened Colonial Street, after the Colonial Mansion which was the first house on the street.

1964 – 1980
With the opening of Universal Studios Hollywood, Colonial Street (along with the Psycho house) was a key attraction. The tour guide listed the 1940s and 1950s movies in which the structures were first used.

1981 – 1987
Colonial Street was moved in 1981 to it’s present location from the northern side of the backlot. Some of the buildings that used to be part of Colonial Street were incorporated into Industrial Street, which is now known as Elm Street

1988
The street was reconfigured for the Tom Hanks comedy The Burbs.

1989
The street opened up to Circle Drive once more, with the additional properties from The Burbs still in place.

1996 – 2004
A newly built Beaver house reappears on Colonial Street for the 1996 Leave it to Beaver movie, replacing properties built for The ‘Burbs. The Providence house also appears in this time period.

2004 – 2012
Colonial Street changed into Wisteria Lane, following the massive success of ABC’s Desperate Housewives. As well as a much-needed repaint and refurbishment of the old sets, the Colonial Mansion has now gone, the Munsters House is much less scary and new structures have been built on Circle Drive.

2012 – present
The wisteria has been removed, and Colonial Street continues to be used for filming a wide variety of projects.

Click on a building or photo below to find out more about each building on Colonial Street (in order looking out of the left side of the tram as it goes up and then back down the street). 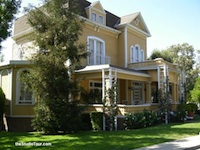 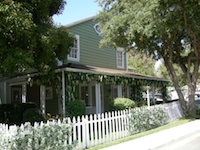 Edie’s House
This property is a fully practical set and was built especially for Desperate Housewives Season 2 for the character Edie Britt. It replaced the church which was formerly at the end of Colonial Street on Circle Drive. Edie has now moved out and it was occupled by Renee Perry (2010 – 2012) until production ended.
4362 Wisteria Lane.

4358 Wisteria Lane
Karen McCluskey (2004–present)
The house was rebuilt following the tornado in Desperate Housewives, and is now a fully practical set with first and second floor interior.

Leave It To Beaver House
Built for the 1996 Leave it to Beaver movie, this house replaces an almost identical, older property which was known as the Paramount House (it was originally built for Desperate Hours 1955) and was best known as the home of the Cleaver family from Leave It To Beaver.
The 1955 house is located in a remote place on the backlot and is not visible from the Studio Tour tram.
On Desperate Housewives, it was 4352 Wisteria Lane; the home of the Young family (1990–2006), Shepherd family (2006) and Bolen family (2009)

Past Properties on Colonial Street