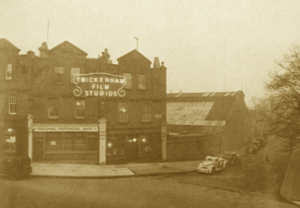 Twickenham Film Studios is a film studio located in St Margarets, London, England used by many motion picture and television companies. It was established in 1913 by Dr. Ralph Jupp on the site of a former ice-rink. At the time of its original construction, it was the largest film studio in the United Kingdom.

February 2012: Local newspapers have announced that Twickenham Film Studios is to be put up for sale.
READ ARTICLE.

7 June 2012: Sky News reports that Twickenham Film Studios has been saved from closure. Following a celebrity-backed campaign, a mystery buyer has paid the administrators Begbie Traynor 10% of the purchase price and has exchanged contracts.

1913
Dr Jupp, John East and Percy Nash formed The London Film Company. The first release at Twickenham, ”The House of Temperley” was followed by a steady flow of films.

1918
Dr Jupp sold Twickenham Studios to The Alliance Company. Alliance had big ideas and its directors, A E Matthews, Gerald du Maurier and Sir Walter de Frece installed £23,000 of lighting equipment and hired the best actors, including Ivor Novello, Gladys Cooper, Ellen Terry, and C Aubrey Smith to make The Bohemian Girl and Carnival. However, although the latter did well at the box office, they were over-extended and they went out of business in 1922.

1922-1928
During this period the studios were leased to various companies: The Astra Company made The Flag Lieutenant, directed by Maurice Elvey and starring Henry Edwards and Chrissie White. Bulldog Drummond’s Third Round directed by Sidney Morgan, starred Jack Buchanan and Betty Faire.

1927
Henry Edwards paired up with Julius Hagen and founded their own company, registered as Neo-Art and they hired the St Margaret’s studios.

1929
The arrival of the ‘talkies’. Edwards and Hagen installed RCA Photophone equipment.

1930’s
Produced many ‘quota quickies’, often filming back to back, one at night and one during the day. These low budget features gave a valuable training to producers and directors.

1935
Fire destroys the old studio building. Despite their best efforts to save it, the whole building was destroyed, along with the contents of the camera and sound departments. Cyril Stanborough, the Studios’ stills photographer, lost fifteen years of his work. Undaunted, Hagen acquired alternative space at Whitehall Studios, Elstree.
The Thirties were a difficult period for Twickenham, along with other studios. Hagen struggled to keep the company afloat, but it was on the verge of collapse and, despite several good films, and his best efforts, in 1937 the company went into liquidation. The film industry in general, went into a decline at this time.

1939
The Second World War broke out. During this time, Twickenham Film Studios took a direct hit from a bomb, and suffered a large amount of damage.

1944
In 1912, Alfred Shipman, together with SS King, founded Shipman & King Cinemas Limited. He entered the production side of the film industry in 1944. In association with Sidney Box, they made the legendary Seventh Veil, starring Ann Todd and James Mason at the Riverside Studios.

1946
Alfred Shipman formed Alliance Film Studios Limited, controlling Riverside, Southall and Twickenham Film Studios. Many big box office pictures were made during this period, including The Master of Bankdam, They Made Me a Fugitive, The Years Between and the Just William series.

1956
Alfred Shipman died suddenly, and was succeeded by his two sons, Gerald and Kenneth. Between 1954 and 1956, Kenneth had worked as assistant and later, associate producer with Guido Coen at Southall Studios.

1959
Guido Coen was invited to join Twickenham as Studio and Production Controller. Guido Coen had been Executive Assistant to the managing Director of Two Cities Films from 1941 until 1949, during which time they made such classics as ‘In Which We Serve’, ‘Blythe Spirit’, ‘The Way Ahead’, ‘Hamlet’, ‘Henry V’ and ‘The Way to the Stars’. Between 1949 and 1959, he established his own independent production company, Coenda Films, making over a dozen feature films.
Apart from his manifold duties in the capacity of Studio and Production Controller, he also produced many films for the Shipman Group. Coen’s vast experience and natural charm was quickly to set the Studios on an exciting and dynamic path.

1958
Stephen Dalby was invited to join Twickenham as Recording Director. A highly qualified and respected sound recordist, he had worked with Sir Michael Balcon at Ealing Productions, and at MGM, where he started his career in the Experimental and Research Department of HMV during the period 1927-1930. His many credits include Light Up The Sky and Wind of Change, both made at Twickenham.

1959
Kenneth Shipman formed, with Sir Michael Balcon and Maxwell Setton, an association of producers and directors called Bryanston Films. Two of their most successful films were Light Up The Sky and Saturday Night and Sunday Morning.

1959-60
The designs for the redevelopment of the Studios were carried out by Gerald Shipman’s firm, Steane, Shipman and Cantacuzino Chartered Architects. These included designs for a new viewing theatre (The Preview Theatre), a third sound stage (Stage Two) and an office block.

1961
The new, ultra-modern Recording Theatre, headed up by Stephen Dalby, was opened, immediately attracting films from Europe and the USA.
And so, under the experienced, intuitive guidance of Guido Coen, Twickenham Film Studios began, once again to thrive, and film-makers once more, began to make their films at Twickenham Film Studios.
At this time, some landmark films were made at Twickenham. Saturday Night and Sunday Morning directed by Karel Reisz, Repulsion, Roman Polanski’s directorial debut in the UK, and the famous Help and A Hard Day’s Night, the Beatles films, directed by Richard Lester.
The reputation of Twickenham as a dynamic and modern studio rapidly increased. Guido Coen’s links with Europe, and especially Italy, led to Twickenham becoming one of the first studios in the UK to go ‘four wall’. Many famous names passed through Twickenham’s doors during this time and the Studios’ parties were sparkling events, with much competition to be included on the guest list.

1964
Gerry Humphreys joined Twickenham Film Studios as Sound Recordist and, with the departure of Stephen Dalby in 1969, he became Head of the Sound Department. A talented mixer, Gerry was much in demand by directors. Richard Attenborough mixed all of his films with him at Twickenham and Gerry’s credits appear on many famous films throughout the 70’s, 80’s and 90’s.
During the 1970’s and 80’s, Twickenham Studios continued to do well, both on the stages and in the theatres, so much so, that it was decided to expand the facilities.

1973
Novello Lodge, comprising ten large cutting rooms and eight offices was opened. (Richard Attenborough maintained a suite in this building as his post-production base until 2009). Richmond Lodge office block, purpose built for production, followed in 1975.

1980
The new Sound Centre was proudly opened.
A new Theatre, ADR/Foley theatre and 40 air-conditioned offices were much needed, as the volume of work steadily increased, both on the stages and in post production. Films such as 1984, Reds, The Mirror Crack’d, A Fish Called Wanda and many others were shot on the stages.
Ridley Scott’s Blade Runner, Richard Attenborough’s Cry Freedom and Superman brought to the Studios by Richard Lester, were amongst so many films which came to Twickenham’s Theatres. Richard Lester has maintained an office at the Studios since the early 60’s, when the Beatles films were shot and mixed at Twickenham Studios.

1990’s
Throughout the 1990’s, under the guiding hand of Guido Coen, the Studios continued to thrive, enjoying a busy time with both film and television productions. Gerry Humphreys continued to oversee improvements to the Sound Department, keeping abreast of the latest technology and attracting many famous films from the UK and the USA.

1996
Guido Coen retired in his eightieth year, but continued as a much valued consultant.

2000s
Twickenham Film Studios proudly continues to build on previous successes and has recently been involved on projects such as Shanghai, Sleuth, Love In The Time Of Cholera, 1408 and Elizabeth the Golden Age. As the Studio approaches its centenary, we continue to offer the world’s film makers the best working environment in which to both realize their projects, and to add to Twickenham’s remarkable heritage.