Now known simply as The Lot this studio was formerly a sister studio of Warner Bros at Burbank.
It can be found next door to the Formosa Cafe at 7200 Santa Monica Boulevard in West Hollywood, CA. 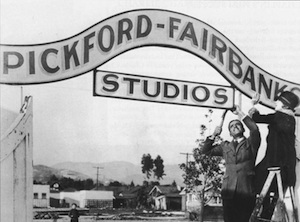 1920
January – Hampton Studios opens a new studio to house their growing production company as they expand from their former home on Sunset Boulevard (the current home of KCET Studio).

1922
Mary Pickford and Douglas Fairbanks buy the 18-acre studio property and name it Pickford-Fairbanks Studios in their honor.

1924
Samuel Goldwyn leaves MGM and forms his own company, renting space at the Pickford-Fairbanks studio.

1927
Pickford Building is built on the site. (This building was demolished in April 2012).

1927/1928
Charlie Chaplin moves from his own studio as he co-founds United Artists with Pickford, Fairbanks and D.W.Griffith.
The studio is renamed United Artists Studio.

1932
Goldwyn Building is constructed (used for sound editing). The building was demolished in April 2012.

1939/1940
Samuel Goldwyn left United Artists. The lot was renamed Samuel Goldwyn Studios. This name change resulted in the start of a lengthy court battle with Mary Pickford over control of the studio.

1955
After fighting in court for many years, Samuel Goldwyn teamed with James Mulvey to outbid Mary Pickford at an auction, resulting in him acquiring full control of the studio. Pickford was devastated by the loss of her studio.
Kevin Brownlow’s book ‘Mary Pickford Rediscovered’ recounts how after the sale of the studio she would drive up to the gates at 3am, the guards would let her in, she’d go center on a soundstage with a bottle of wine and drink and drink…and cry and cry. Soon after Mary became a recluse until her death in 1979.

1974
Samuel Goldwyn dies and the studio is transferred to his widow, Frances.

1976
Frances Goldwyn dies and the studio is bequeathed to the Motion Picture and Television Fund.

1980
The studio is sold to Warner Bros and renamed Warner Hollywood Studios (at the request of the Goldwyn Company), acting as an 11 acre sister studio to Warner Bros in Burbank.

1999
Warner Bros sold the studio to BA Studios, managed by Skye Partners, who renamed it ‘The Lot’ – a private studio for rental to any production company. It consists of 7 soundstages.
According to the Save the Pickfair Studios website, Skye Partners wanted to demolish the historic buildings on the property, replacing them with ‘ugly cube structures’. Hollywood Heritage (in the shape of Robert Hudelman) succeeded in negotiating them out of the idea.

2012 April
Current owners of The Lot, CIM, begin demolition of ‘aging wooden office buildings and sound-dubbing stages’ to replace them with glass and steel structures.
The first building to go is the Pickford Building (1927). The Writers’ Building, Fairbanks Building and Editorial Buildings will follow, along with the long line of production offices that line Santa Monica Boulevard.
The Goldwyn Building (1932) was next to go, on 12th – 17th April.

Facilities at Warner Hollywood / The Lot 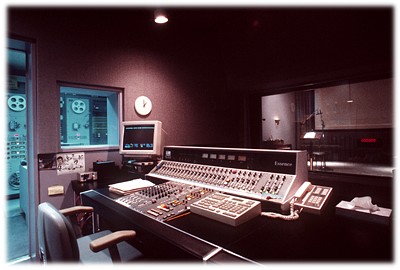 The world-class stages of Warner Hollywood’s Goldwyn Sound Facility are known throughout the industry for their technical excellence and outstanding personnel. The work completed in this facility has garnered numerous Academy Award nominations and several Oscars. In addition to the Re-recording, Scoring, ADR stages and Foley stages, we are heavily involved in the Sound Preservation and Archival of old and new titles and are very proud to be leading the new DVD Audio Mastering technology. [from old Warner Hollywood website)