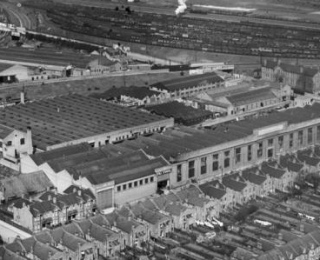 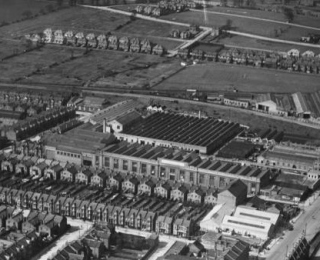 Stoll Pictures (owned by Sir Oswald Stoll) was a distributor and producer, which owned a number of profitable theatres.

In 1920, a large studio building was constructed on industrial land at Cricklewood, ownership of which Stoll retained until 1938. To the north of the studio was Smiths clock factory which produced clocks and other instruments and accessories for cars and aircraft.

The studio building remained intact until the 1960s.

In the ’30s, the studio, which had been slow to adopt sound, was mainly used by independent producers and mainly for short films, but late in the decade it was used by Butcher’s to make Old Mother Riley (d. Oswald Mitchell, 1937) and John Baxter made several films there from the mid ’30s. Stoll himself, a cold and formal individual, was, however, an enthusiastic supporter of the British film industry, if never a creative producer in the American mould.
(from BFI Screenonline)

In 1938, after 18 years of picture production Stoll’s Cricklewood Studios was sold to the aviation company, Hawker-Siddeley. Source: Wood, Linda. British Films 1927-1939. It ended trading in 1948.
(from Anne Ramsden blog)

The Studio Manager was Joe Grossman.

In 2012, BBC Four produced a parody documentary featuring a ‘personal journey’ through the history of ‘this famous north London film studio’ from comic actor Peter Capaldi.
The photo of the exterior of ‘Cricklewood Studios’ shown is actually the exterior of Ealing Studios.
It’s a loving pastiche of earnest film documentaries, and the supposed ‘Cricklewood Greats’ are all very familiar to lovers of Carry On, Hammer Films and silent comedies. The site of Cricklewood Studio is found to be a Wickes DIY store. And of course, it’s all make-believe and fun.
However, as the above information shows, Cricklewood Film Studios DID actually exist. And there is a Wickes store just north of where the film studio stood. The real Cricklewood / Stoll Studio is now a Matalan store.