In common with many studios, the former expansive backlot was sold off to raise revenue. Surrounding the studios now is a housing estate, with cinematically-related road names being the only clue to the history.

In July 2019, Netflix was announced as taking over all of the production facilities in a 10 year deal.

In the 1930s, when it was known as Sound City, there were two sound stages:

The Sound City brochure from around 1935/6 says “These stages are provided with modern lighting equipment and the new system of Tubular Scaffolding – 2 Mobile Sound Vans of Marconi Vistatone non-royalty recording; 4 Studio Cameras on “Dollys,” including the latest 1935 model Debrie; Synchronous Back Projection and Play Back.” 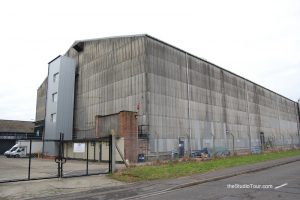 In common with many studios, the former expansive backlot was sold off to raise revenue. Surrounding the studios now is a housing estate, with cinematically-related road names being the only clue to the history.

Still from the Panthermania documentary on the Pink Panther box set DVD, showing director Blake Edwards on the Shepperton Studios backlot adjacent to the Castle set which remained on the backlot for some years after production. This area is now a children’s play area and road at the rear of H Stage (see photo). 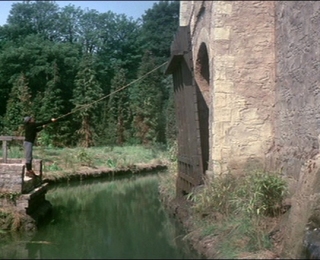 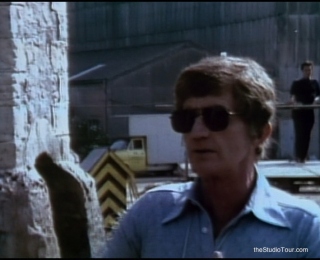 1689
Local nobleman, Thomas Wood, builds Littleton Park, a mansion house which still stands in the centre of the 60-acre Shepperton site more than 300 years later. The Woods live at Littleton Park for almost 200 years. Their home was grandiose and played host to many royal visitors.

1876
A devastating fire caused damage which took more than 25 years to put right. The house was restored by Sir Richard Burbridge who was the Managing Director of the world-famous department store Harrods, in central London. Burbridge refurbished the house using timber from the original Houses of Parliament.

1931
Norman Loudon, owner of Flicker Productions, buys Littleton Park House (built in 1689) with 60 acres of grounds, including a stretch of the River Ash at Shepperton. The studio facility opened for business in 1932 as the base of Flicker Productions, which produced popular ‘flick’ books of photographs. Mr Loudon had his sights set on full feature film production. 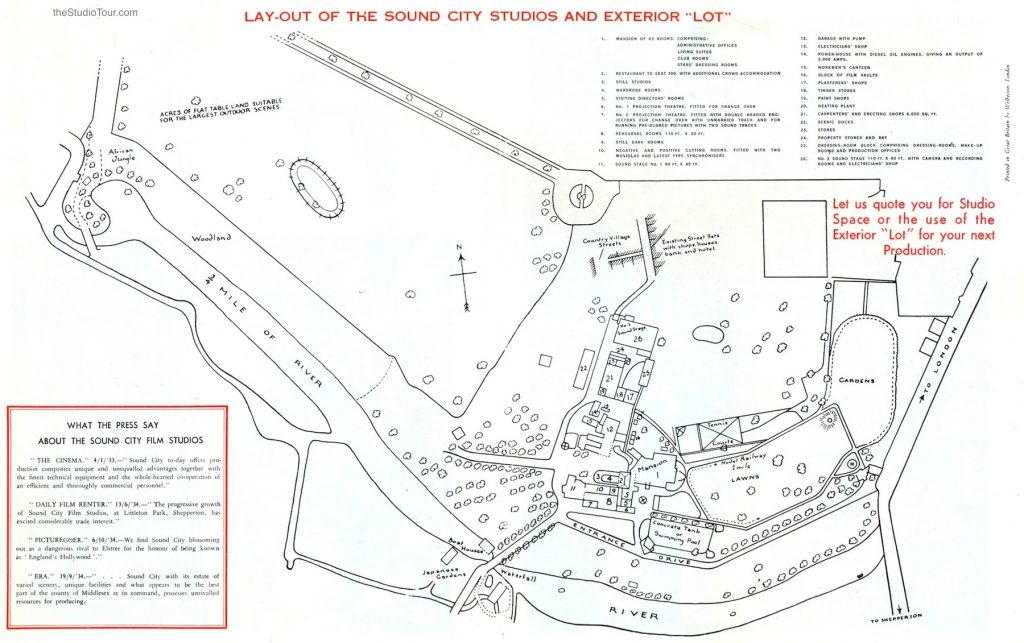 1941
The studio is requisitioned by the Ministry of Defence, first as a sugar storage location, then later to create decoy aircraft and munitions for positioning in the Middle East.

1984
Lee International pays £3.6m for the studios and begin a programme of refurbishment, including the planning and construction of new workshops, completed in 1987. The studio is renamed Lee International, Shepperton.

?date
The Old House is bought by Simply Networking Solutions

2008
New Gainsborough Building Opens at Shepperton
Housing workshops and open plan offices for film and TV productions located at the Studios, the top floor of this 60,000 sq foot building will be available for longer term occupation from companies within the media sector who will benefit from basing all or part of their operation at Shepperton.
The completion of the building is a major step in the first phase of Shepperton’s Masterplan, a joint venture with Morley to further develop the Studio’s facilities.
Says Pinewood Group’s CEO Ivan Dunleavy “Shepperton’s Gainsborough building will provide a new focal point for the UK’s creative industry, hosting world class film and TV production teams together with leading media specialists. We’re delighted the Culture Minister is attending to mark the occasion.”
Margaret Hodge commented “Outstanding productions need the best possible facilities, and this important new base for media companies will help ensure that Shepperton Studios continues to make a vital and sustained contribution to the success of our film, TV and commercial sectors.”
More about the Gainsborough Building