1939 Leavesden Aerodrome was originally owned by the Ministry of Defence and used during World War II for the manufacture of Mosquito Fighter and Halifax Bomber aircraft. It was known as the de Havilland Engine Company Limited. 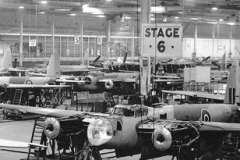 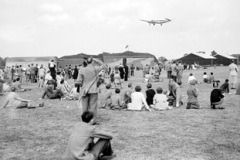 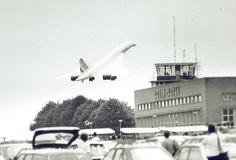 1941 In 1941 Leavesden Aerodrome was being battered by gale force winds when an RAF Corporal tried to open the doors of Number 2 hanger. The door was operated by a chain which was attached to a ratchet and as he tried to open it an especially strong gust of wind blew it down on top of him, ending his life.
Years later, on windy nights, his ghost allegedly walked the area around the hanger and the chains, which had long gone, were still heard. (from Luton Paranormal website)

1945  After the end of World War II, the factory was used by Rolls-Royce for the manufacture of helicopter engines.
April 16: The last Halifax bomber to be built by the London Aircraft Production Group, “London Pride” was handed over to the RAF at Leavesden.

1980s Concorde pays a visit to Leavesden Aerodrome as part of a Rolls Royce open day. (see photo above)

1992 Rolls-Royce ended a long history of manufacturing at Leavesden. At its peak the site employed over 3000 people, which had reduced to 1800 by 1991. The company had plans to turn it into a golf course and a hotel until fate intervened…

1994  Leavesden Flight Centre (a private flying club) used the site for flying until March 1994. At its peak in 1990, there were some 60,000 aircraft movements at the site.
Around May 1994, EON Productions (makers of the James Bond series) and Production Designer Peter Lamont were in pre-production for the James Bond film GoldenEye. As Pinewood Studios was all booked up, as well as designing the sets, Lamont was given the task of building an entire film studio to house them, utilising the 1 million square foot floor area of the former Rolls Royce factory at Leavesden Aerodrome. As Eon Productions was only leasing the site from Rolls Royce, only work required for the production was carried out.
Temporary planning consent was obtained to enable the production work to go ahead.

1995 In 1995 the site was purchased by Malaysian-based Millennium Group (for almost £43million) with the intention of developing a Universal Studios/Disneyland style attraction and putting £150million into the development of a permanent film studio and residential housing. Although the housing development consisting of 314 dwellings and associated roads went ahead in 1999 (planning consent depended on a minimum of 300 houses being built on the site) the rest of the development plans for the film studio and studio tour were never submitted to the council.

1996 Star Wars Episode 1 The Phantom Menace moves onto the site for around two years of pre-production, photography and effects work. The video excerpt below shows Producer Rick McCallum driving into the studio buildings.

1998 Tim Burton’s Sleepy Hollow moves in and makes great use of the size of the Leavesden facility to build interior sets and also to use the extensive backlot.

1999  In July 1999 MEPC purchased 14 acres then in September 1999 they bought a further 85 acres to develop a business park across the road from the main studio site.
Warner Bros. acquired the rights to the Harry Potter™ series of books.

2000  British Telecom (BT) signed up for the first 3 buildings in the business park effectively ending the plans to develop a theme-park style attraction on the site.
Warner Bros began to lease the whole site from MEPC, to make the first Harry Potter film.
Friday 29th September: Filming began on Harry Potter and the Philosopher’s Stone™ at Leavesden Studios.
During the production of the Harry Potter series, the entire Leavesden Studios complex was a “Closed Set” and was not open to any public tours. The only people who could access the studio are cast and crew on the films.

2001 19th November 2001: Production for Harry Potter and the Chamber of Secrets™ began at Leavesden, only three days after the widespread release of the first Harry Potter film.

2003 24th February 2003: Principal photography for Harry Potter and the Prisoner of Azkaban™ began at Leavesden Studios.

2010 Warner Bros announced a plan to buy and redevelop the site to upgrade the studio facilities, and provide a Harry Potter themed visitor attraction, enabling visitors to walk onto some of the sets that appeared in the movies. This attraction is expected to open in 2012. As well as the two new stages required for the visitor attraction, older hangars and other buildings will be demolished. A replacement ‘C’ stage will be built to the south west of the main studio buildings, a replacement workshop facility to the north.