Named after the London borough in which it was situated, Ealing Studios has been at the centre of the British Film Industry since 1902 and as such, it’s the oldest film studio in the world.

Unfortunately the studio management is unable to allow tours of the site at this time. 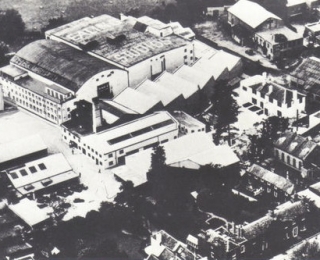 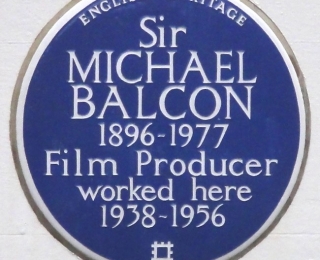 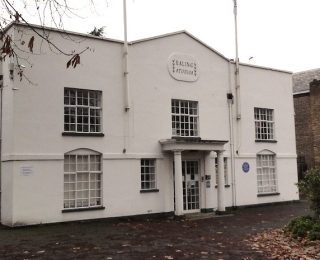 18??  The White Lodge on Ealing Green is built – a two storey brick building with white render.

1902 Will Barker bought two properties facing Ealing Green: West Lodge (which had nearly four acres of grounds) and The Lodge. He began with a series of lavish historical dramas, all filmed outdoors. (2)

1907 Barker constructs the first covered stage at Ealing; a glass construction. Three such stages were built at Ealing. (2)

1910 Barker makes one of the first screen versions of Hamlet, all shot in one day. The sets were built inside one another and as each set was finished with, it was stripped away to reveal another behind it. The film cost a total of £180, but returned a profit of £600.

1920 Following the First World War, Barker decided to retire from the industry, and Ealing Studios were sold to General Film Renters, who leased them out.

1929 As talkies arrive in Britain, the studios were bought by Union Studios, who re-equipped the run-down studios for the talkes at a cost of £250,000. Unfortunately the company went into receivership soon after when the planned for income never materialised.

1931 Basil Dean extends the studio for his company Associated Talking Pictures (ATP). He took established stage acts such as George Formby and Gracie Fields and launched their movie careers.
The iconic White House Lodge is remodelled into offices for the company, by architect Robert Atkinson.
Construction began in March 1931 of the first two of the planned four stages:

November 1931 – A modest opening ceremony was held. As the paintwork and plasterwork was just drying on the new stages, Dean went into produciton of Nine Till SixI.

1938 Basil Dean’s attempts to produce serious dramatic films failed, so he gave up on the movie business and returned to his first love, the theatre. He was replaced by Michael Balcon, a producer who’d helped Alfred Hitchcock to success at Gainsborough Pictures in the mid 1920s. He decided to rename the production company Ealing Studios.

1947 The golden era of Ealing Studios begins with the production of Hue and Cry.

1955 The BBC buys the studios and spent the next 40 years creating television classics such as Colditz, The Singing Detective and Monty Python on site.

1995 The 3.8 acre site and studios are bought by the National Film and Television School (NFTS) for £2.6million, with the intention of moving their operation from Beaconsfield to a more central site at Ealing. However, it was soon decided that the school would refurbish and re-equip the Beaconsfield facility.

1995-1999 Independent production companies hire the studios from the NFTS, under the name NFTS Ealing Studios.

1999 The NFTS decides to sell the studio. Local press reports stated that although none of the studio buildings (including the iconic White House lodge) are listed, the local council wanted to see film / TV production continue on the site, and not to simply demolish the studio and use the site for far more lucrative housing developments.

2000 The studios were acquired by the current owners.

2002 Plans are drawn up for the 100th anniversary of the founding of the studio.
http://www.hughpearman.com/articles3/ealing.html

2007 The Met Film School moves to Ealing Studios and begins to run a two year BA in Filmmaking. (it formerly ran short and weekend courses).

2010 The Met Film School establishes an MA in Filmmaking.