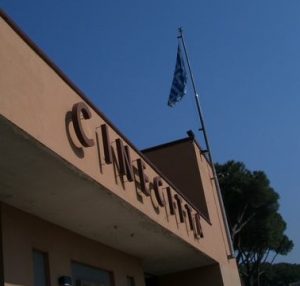 Open for Tours (must arrange in advance)
Tour website: http://cinecittastudios.it/en/exhibitions/individual

Vast studio complex, housing the largest soundstage in Europe. Recently opened a theme park which runs tours around the studio.

April 1937 – Studios founded by Benito Mussolini and his head of cinema Luigi Freddi for propaganda purposes (with the intention of promoting Italy and the current fascist ideals through cinema), under the slogan “Il cinema è l’arma più forte” (Cinema is the most powerful weapon). The complex, in south-east Rome, was designed as a complete centre of production, with facilities covering everything from training, through the production of films, to post-production. Within six years, almost 300 films had been made at the new studios, assisted by the Alfieri Law, introduced in 1939, which was designed to assist home-grown film production

1943 – During World War II, Italy surrendered in 1943 and the Germans took over the country. They looted Cinecittà, and the film production facilities were moved to temporary accommodation in Venice. Over the next two years, Cinecittà was subjected to Allied bombing.

1945 – 1947 – Following the war, the studios of Cinecittà were used as a displaced persons’ camp. The period from 1943 onwards contributed towards the forming of the cinematic genre known as Italian neorealism; the Roman filmmakers, denied both funding and access to the facilities of Cinecittà, took to the streets and used amateur actors. The resulting films, like Rome, Open City, carried a strong sense of the difficulties with poverty and identity being faced in Italy at the time.

1950s – American production companies in search of cheap facilities began to turn their attention to Cinecittà. Films like Roman Holiday and Three Coins in the Fountain took advantage of both the facilities at Cinecittà and the possibilities for location shooting in Rome itself. The studios also hosted many epic productions, an early example being Quo Vadis? in 1951. Ben Hur was filmed here in 1959, and the production of Cleopatra was moved from London to Cinecittà following problems with budgeting, bad weather and Elizabeth Taylor’s health.
Cinecittà also became the studio most closely associated with Federico Fellini.

1990s – After a period of near-bankruptcy in the 1980s, in the 1990s Cinecittà was privatized by the Italian government.

1991 – It hosted the 1991 Eurovision Song Contest. The venue had been changed from Sanremo because of security concerns.

1994 – Pink Floyd performed, on three consecutive nights, at the studio during The Division Bell Tour on September 19–21, 1994.

2007 – On August 9, 2007, a fire destroyed about 3000 m² (32,000 sq. ft.) of the Cinecittà lot and surroundings. The historic part that houses the sets of classics such as Ben-Hur were not damaged, however a good portion of the original sets from the HBO/BBC series Rome were destroyed.

2013 – Construction underway on Cinecitta World, an international-level theme park, at Dino Studios, created in the 1960s by Dino de Laurentis.