Built during the First World War for Airship construction, one of the sheds at Cardington (Bedfordshire, UK) has been put to good use to house the cavernous sets for Batman Begins, The Dark Knight, The Dark Knight Rises, Inception by Warner Bros and many other movie projects.
The production company worked at the site for 10 months prior to Batman Begins to prepare the run-down structure for use as a massive stage.

Following Warner Bros’ use of the sheds from 2005 to 2012, new owners have refurbished the sheds and set up support facilities for production companies to use. (August 2013) 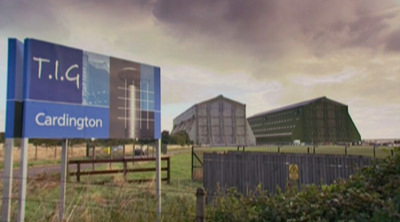 Although it’s not soundproofed (and therefore not a ‘soundstage’), the shed is proving very useful for building massive sets, and as post-production sound technology improves, the need for soundproofed stages is reduced. The total amount of floor space available (223,000 sq feet, or 5 acres) is over 5 times the size of the largest soundstage available in Hollywood (Stage 15 at Sony Pictures 41,985 sq ft), and is almost 3 times the size of the largest soundstage in the world, Stage 15 at Babelsburg Film Studio in Germany (78,954 sq ft).

The signage that used to be outside the site ‘T.I.G. Cardington’ (see right) is said to stand for ‘The Intimidation Game’ which was the codename for Batman Begins.

RAF Cardington was built by aircraft manufacturing company Shorts Brothers to build airships for the Admiralty. Shed 1 (700ft / 210m long) was built in 1915 to enable it to build two rigid airships, the R-31 and R-32. A housing estate was also constructed opposite the site, and named Shortstown.

The airships site was nationalised in April 1919, becoming known as the Royal Airship Works.

In preparation for the R101 project the No 1 shed was extended between October 1924 and March 1926; its roof was raised by 35 feet and its length increased to 812 feet. The No. 2 shed (Southern shed), which had originally been located at RNAS Pulham, Norfolk, was dismantled in 1928 and re-erected at Cardington.
After the crash of the R101, in October 1930, all work stopped in Britain on airships. Cardington then became a storage station.
In 1936/1937 Cardington started building barrage balloons; and it became the No 1 RAF Balloon Training Unit responsible for the storage and training of balloon operators and drivers. In 1943 until 1967 it was home to the RAF Meteorological research balloons-training unit, undertaking development and storage (after 1967 this was undertaken by the Royal Aircraft Establishment).

For both airships and barrage balloons, Cardington manufactured its own hydrogen, in the Gas Factory, using the steam reforming process. In 1948 the Gas Factory became 279 MU (Maintenance Unit), RAF Cardington; and then, in 1955, 217 MU. 217 MU, RAF Cardington, produced all the gases used by the Royal Air Force until its closure in April 2000; including gas cylinder filling and maintenance.

Hangar 1 was used by the Royal Aircraft Establishment (RAE) to operate balloons on behalf of the Met Office carrying instruments to measure conditions in the atmosphere. The balloons were also used in parachute development (although they were unmanned – using a heavy dead weight); much of this work was carried out in secret.

The northern part of the site has for many years been used by the UK Government Driving Standards Agency Training and Development Centre to train Driving Examiners.

In 1971 Hangar 2 became the Fire Research Station (part of the Home Office) which conducted gas explosion experiments and for investigating fires, a 20 lease being given by the MoD.

Following the fire that engulfed the Stardust disco in Dublin on February 14 1981, a mock-up of a section of the building was built at the shed, including the same fabrics and furnishings to examine the spread of the fire.

Full scale testing and fire research was undertaken from 1989. In 1990 the facility was transferred to Building Research Establishment as a whole building test facility for the Cardington tests. Here, multi-storey steel, concrete and wooden buildings were constructed and then destructively tested within the huge space available. This shed was repainted and maintained in comparison with Shed 1.

The buildings tests were mentioned during the course of the BBC series The Conspiracy Files as evidence in the controversy surrounding the collapse of World Trade Center Building 7 on 11 September 2001.

If you’re on Facebook, join the We Love the Cardington Sheds group for updates and historical information.