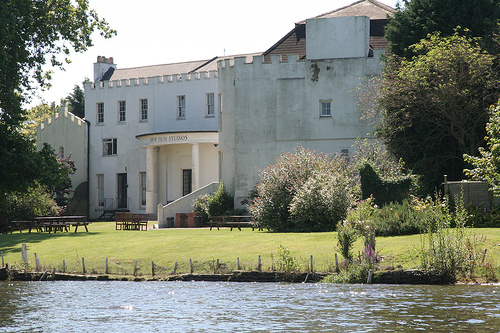 Welcome to the beginnings of a site about Bray Film Studios; the home of Hammer Film Productions from 1952 to 1966.
Bray Studios has been used for film/TV production and for commercials, music video shoots and concert rehearsals since 1951 (except for a .period between 2012 and 2019 when the studio was threatened with closure / demolition).

See History below for full details.

NEW: Hammer Films On Location
The book all Hammer fans have been waiting for!

The large size of the stages, and the relative seclusion of the studios enabled Bray to be used to setup entire concert lighting, sound and projection rigs before touring begins. 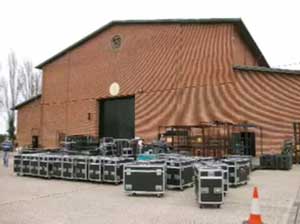 Flight cases at Bray Studios during a concert rehearsal

Here’s a list of some events that have used Bray Studios for pre-production rehearsals. 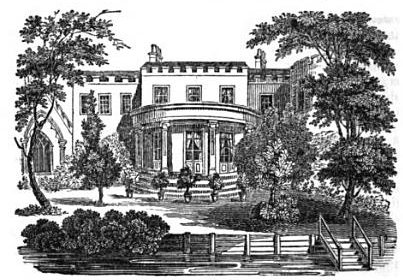 Down Place, a country house on the banks of the River Thames between the towns of Bray and Windsor, is constructed.
The illustration is from “The Mirror of Literature, Amusement, and Instruction” by Reuben Percy, John Timbs, John Limbird, published in 1833.

Some websites claim that Down Place was used as the meeting place for the Kit-Cat Club during the ownership of Jacob Tonson (1655/6–1736), the bookseller. However, there’s little evidence for this, and many references connect Jacob Tonson to a completely different property, which was demolished in 1816. The Kit-Cat Club appear to have met in Tonson’s property in Temple Bar, London.
After Tonson’s death in 1736, he left the collection of pictures of the members of the Club to his great nephew (also called Jacob Tonson), who died in 1767 [ref]. They were then removed to Down Place, the house of his brother Richard Tonson, where a room was built to house the portraits. This is the only connection between Down Place and the Kit-Cat Club. [ref]
Other sources [ref] say that Richard Tonson is the grandson of Jacob Tonson the bookseller.

Down Place is the residence of the Harford family. Henry Harford [ref] died in 1835, and his son Frederick then moved in until at least 1901 [ref]. In 1891 there were 4 members of the Harford family, along with 8 servants inside, 4 in the stables and a gardener & family and a cowman with family in a cottage and a lodge.
In 1901 there was a total of 11 live-in servants.

Oakley Court, a castellated and turreted gothic mansion, is built for Richard Hall-Saye adjacent to Down Place. [ref]

Oakley Court was bought by Ernest Olivier for the sum of £27,000 [ref], who was the Turkish Consul in Monte Carlo. He entertained many diplomats there. During the Second World War, General De Gaulle was a frequent visitor, hence the Court is often said to have been the headquarters of the French Resistance.

Hammer Film Productions, in search of a base to make their budget horror films, settles on the derelict Down Place. Shooting in country houses avoided the need to build sets, and usually also meant large grounds were available for location work.

As the one year lease on Down Place had run out, and a union strike prevented a move to a studio, Hammer decide to build a studio in the grounds of Down Place, and name it Bray Studios, after the local town.

Mr Ernest Oliver, owner of Oakley Court and some woodland adjacent to Bray Studios, dies, leaving the Court uninhabited. The building became an ideal setting for many Bray productions, especially featuring in Hammer Films such as The Old Dark House, the St Trinians series, The Rocky Horror Picture Show, Half a Sixpence and Murder By Death.

The last Hammer production made at Bray was The Mummy’s Shroud, which wrapped on 21 October 1966

Bray Studios were the home of the special effects team for Gerry Andersons “Space 1999” series 1. All the special model effects of Eagle spacecraft, alien spacecraft, Moonbase Alpha and long shots on alien planets were all filmed here. All sets with the actors were filmed at Pinewood.

During demolition of MGM Borehamwood Studios, Stage 10 from MGM was dismantled and re-built at Bray Studios – it’s now Stage 2 at Bray.

Bray was where the Anglo-German sci-fi series “Star Maidens” was filmed. This included all model work and the standing sets on the planet Mendusa, internal sets of the various spacecraft. Keith Wilson, the series designer, also worked on Space 1999 and shipped in various props and set dressings to re-use from it from Pinewood.

Bray was again the home of the special effects team when they worked on the second series of “Space 1999”.

September 7th: Oakley Court, featured in dozens of films produced at Bray, is reopened as a luxury country house hotel, after the building of two additional wings for more rooms. [ref]

Bray Studios is used for TV production and rehearsals for concert tours.

July 2010: a proposal was put forward to convert Bray Studios into housing. The main house Down Place will be converted into a family home or flats, and the remainder of the studio buildings will be demolished.

Filming resumed at Bray, with BBC’s Dracula series being shot at the studio.

Space 1999 Behind the Scenes photos