The studio is not open for public tours. 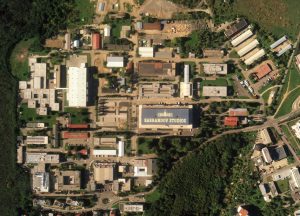 1924 – The film studios originated hand in hand with civil engineer Vaclav Havel’s inspired idea to build a garden city with a contemporary architectural design. “America was my inspiration,” the father of the Czech Republic’s ex-president once admitted. “After the First World War, I was the chairman of the Czechoslovak Students’ Union and, at my own expense, I left for a study tour of universities in the United States. Whilst visiting the University of California’s Berkeley campus, I found myself in a beautiful neighborhood where some of California’s richest people lived. It was there – the year was 1924 – that the idea for Barrandov came to my mind.” The name Barrandov was inspired by the bronze plaque mounted on the mountain plateau that stands above Prague. This memorial was placed in order to remind tourists of the stay of Joachim Barrand, the French scientist and friend of the Czech nation, whose discoveries of trilobites led to his fame.

It was specifically on this mountain plateau, with its uninterrupted horizon, that a villa for film stars and entrepreneurs were built around a picturesque garden restaurant called the Terasa. The primary development however, involved the construction of sound motion picture studios – the most modern film center of that era. The studios were managed by Milos Havel, Vaclav Havel’s brother. Detailed plans for the entire area were designed by Max Urban, who was a leading architect and urban planner, as wells as a film director. The construction of villas on the Barrandov land lots was left up to the individual tastes of the owners, but engineer Havel reserved the right to review the plans and consult with Urban. A few of their additions included a swimming pool to the Terasa Restaurant and a free shuttle bus that transported guests from Wenceslas Square, the heart of Prague itself, to the area. T. G. Masaryk, the first president of Czechoslovakia, was amongst the celebrities that visited the terraces situated above the Moldau River.

The speed with which the studios were constructed was, in typical Havel style, staggering – the groundbreaking ceremony took place on November 23, 1931 and the first day of shooting was already scheduled for January 25, 1933. On that day, filming of “Vrazda v Ostrovni ulici” (“Murder in Ostrovni Ulice”), directed by Svatopluk Innemann, started at the brand new studios. Max Urban, who by then was well established and experienced in the film industry, became the studios’ main designer. Vilem Ritterhain, another architect, worked together with Urban on the interiors and sound stage spaces. During the project, they were able to utilize the most current experiences from foreign film production studios and thus successfully built what were the most contemporary film studios in Europe. In spite of the fact that they were paying off high debts from constructing and furnishing the studios, the Havels became the foremost patrons of Czech film. Over the course of the 1930s, a number of pictures, which today belong amongst the golden foundations of Czech cinematography, were created in their studios.

1939 – The fateful year of 1939 and the occupation of the Czech lands brought with it the confiscation of the Barrandov studios, which became wartime plunder for the Germans. Their own film productions, guided by the systematic propaganda of Joseph Goebbels, were able to take great advantage of the ideally equipped studios in order to make films that suited Nazi tastes. Barrandov was forced away from Czech entrepreneurs and made available to the victors without the consent of Milos Havel and the company’s executive board. The Germans gradually increased their share in the company in a manner whereby the original Czech company – AB Corporation – was completely dissolved and the newly established German Pragfilm arose in its stead. This company provided the Third Reich’s propagandists and creators with the capacity they required, especially during a period when film production in Germany was threatened by Allied Forces air raids. In addition to the original “Havel” Old Halls already standing at the Barrandov studios, the Germans constructed three more sound stages, called the New Halls. Over the course of the war, 82 films were produced there.

1945 – During the Prague Uprising in May 1945, the Barrandov Studios were fought for as well. In the skirmish, several wooden buildings were damaged and caught on fire, but that did not halt the productions that were in progress. After the liberation, the studios were not returned to the original owners. As early as 1944, on the basis of a proposal put forth by leftist-oriented Czech filmmakers, a letter requesting that the company be nationalized was sent to London, where the Czech government-in-exile was based. By signing Edict No. 50, the president acceded to this request. Milos Havel, the former film magnate and entrepreneur, settled in Munich and never returned to his native land.

1948 – After 1948, when Czechoslovak State Film was nationalized on the basis of a governmental decree, the well-equipped Barrandov, which remained almost untouched by the war, became the most important foundation for renewing national cinematography. From the plethora of films that originated at the studios during the forty years of communist rule, many propagandistic works have long been forgotten. But several jewels of postwar cinematography, culminating in the 1960s, with the emergence of the “Czech New Wave” continue to live on.

As was the case in France, the younger generation came to the forefront of the creative effort and significantly affected European, and even international, cinematography. This included directors such as Milos Forman, Vera Chytilova, Jiri Menzel, Pavel Juracek, Jan Nemec, and Evald Schorm.Other significant names from this period are Karel Kachyna, Frantisek Vlacil, Vojtech Jasny, and Jaromil Jires, but these directors are not associated with the New Wave.

Barrandov films, “Obchod na korze – The Store on Main Street” (1965, Jan Kadar andElmar Klos, directors) and “Ostre sledovane vlaky – Closely Observed Trains” (1966, Jiri Menzel, director) received Oscars for Best Foreign Language Film. Forman’s “Lasky jedne plavovlasky – The Loves of a Blonde” (1965) and “Hori, ma panenko – Firemen’s Ball” (1967) were nominated for an Oscar. A number of European awards, presented in addition to those from the American Film Academy, increased the visibility of Barrandov Studios and started to lure international crews to Prague. Milos Forman’s team for “Amadeus” is the leading example. Barbra Streisand also directed her film“Yentl” in Prague. Sergei Bondarchuk, who received an Oscar for his film “Voyna i mir – War and Peace”, completed his megafilm “Boris Godunov” at Barrandov.

For the production of Czech pictures, Barrandov Film Studios implemented the American model and created several genre-specific production groups. The studios employed their own screenwriters. The acting division employed only the best actors and registered hundreds of extras. During the 1980s, the studios produced about thirty feature films each year and also provided the majority of programs broadcast by Czechoslovak Television. During that period, up to two thousand people from various professions were employed by the studios. Filmmaking was fully subsidized by the state.

After Czechoslovakia was occupied by the armed forces of the Warsaw Pact countries in 1968, few significant works were created. Several directors, such asIvan Passer, Milos Forman, and Jan Nemec opted to emigrate and fashioned a significant reputation for themselves abroad. Films for children and youth played a key role in showcasing Barrandov creations. Jiri Hanibal’s film “Dedecek, Kylian a ja” (“Grandpa, Kylian, and Me”) was awarded the Grand Prize at the Venice Film Festival. An adaptation of Mark Twain’s novel “The Adventures of Tom Sawyer,” transposed to Czechoslovakia in the 1920s, was released under the title of “Pani kluci” (“Young Gentlemen”) and received prizes at many festivals. German-speaking countries were overwhelmed by Jindrich Polak’s television series “Pan Tau (“Pan Tau auf Reisen”) and also revivedVaclav Vorlicek’s fairytale “Tri orisky pro Popelku – Three Wishes for Cinderella” at Christmastime. The production of filmed fairytales for theatrical distribution became a singular European rarity.

The quality of Czech films continued to flourish and make their mark around the world. Both “Vesnicko ma strediskova – My Sweet Little Village” (1987), directed by Jiri Menzel, and “Obecna skola – The Elementary School” (1991), the premier film of Jan Sverak (who later received an Oscar for his film “Kolja – Kolya”), were nominated for Oscars in the USA.Irena Pavlaskova’s debut film “Cas sluhu – The Time of Servants” (1990), brought home three awards from top festivals and an additional ten prizes from competitions around the world.

With the downfall of communism in 1989, dramatic changes took place within the operations of the studios. State subsidies ceased being directed towards films, the studios at Barrandov were gradually privatized, and thus began their new era within an environment of renewed democracy. More…

For eighty years, Barrandov Studios has continued to remain a place that lures both Czech as well as International filmmakers. We are proud to be part of such a rich tradition.