Location: Atlas Film Studios is located 5km (3 miles) from Ouarzazate and 8km (5 miles) from the airport on the road to Marrakech. A yellow bus shuttles between the studio and Ouarzazate’s main street, Avenue Mohammed V.

Purportedly the world’s largest film studios, this 30,000 sq meter desert film studio is open to visitors when there’s no production on that day. Although it’s not a visitor attraction in the Universal Studios sense, it’s an authentic experience where visitors can tour the decaying sets in the desert environment.

1962 – Ouarzazate was first used as a movie location by acclaimed British director David Lean for his epic Lawrence of Arabia. Familiar with the area, Lean knew that the site could provide an authentic setting for any ancient, desert-based story.

1983 – Atlas Film Studios built, when Moroccan entrepreneur Mohamed Belghmi recognised the need for a permanent studio in the area. 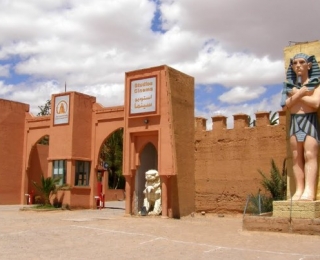