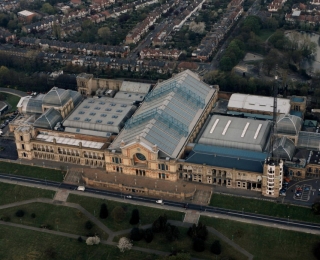 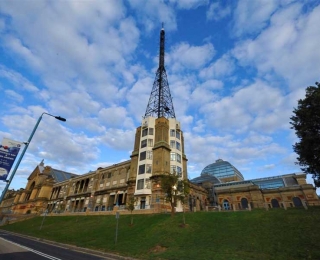 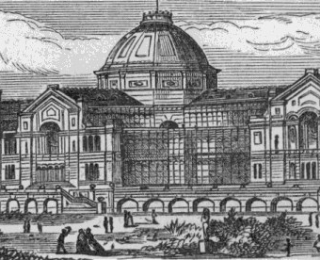 1858 Prospectus and plans published by Owen Jones for a Muswell Hill rival of the successful Crystal Palace, to be called the Palace of the People. Idea is backed by famous educationalist Lord Brougham

1873 First opened as “The People’s Palace” in 1873, Alexandra Palace provided the Victorians with a great environment and recreation centre. Just sixteen days after it’s opening, the Palace, which had already attracted over 120,000 visitors, was destroyed by a fire in the dome.

Routledge’s Popular Guide to London (from around 1873) had the following to say:

Alexandra Palace and Park, Muswell-hill, Hornsey. A magnificent building overlooking charming scenery. The grounds devoted to various fetes, archery meetings, reviews and races, which are held in a fine racecourse with an excellent stand from which to witness the sport. In the building are concerts, collections of scientific and art objects, flower and fruit shows, theatrical and other entertainments daily. The Alexandra Palace is easily reached by the Metropolitan and Great Northern Railway which takes visitors to the gates. Admission, 6d. and 1s. on ordinary days, 2s. 6d. on special days.

1875 On 1st May 1875, less than 2 years after the destruction of the original building, a new Palace opened. Covering 7 acres, it was centred on the Great Hall, home to the mighty Willis Organ which was driven by two steam engines and vast bellows.

1900 After certain financial difficulties, an Act of Parliament in 1900 created the Alexandra Palace and Park Trust. The Act required the Trustees to maintain the Palace and Park and make them “available for the free use and recreation of the public forever”.

1914 The Palace was closed to the public at the outbreak of war and was requisitioned by the government.

1935 The BBC leased the eastern part of the building from which the first public television transmissions were to be made a year later.

1936 The BBC hosted trials between the competing and incompatible EMI-Marconi and Baird television systems to decide which would carry the television standard for the future.
Studio A was equipped with the Marconi-EMI Emitron system, while Baird installed his mechanical systems in Studio B. The Emitron camera proved far superior to Baird’s cumbersome film technique, which never developed beyond an experimental stage.
These early transmissions were famously introduced by one of the very first presenters, Elizabeth Cowell, with the words “This is direct television from Alexandra Palace…”

1967 High Court confirms the transfer to the Greater London Council (GLC) is legal, but that Palace and Park are held on trust and must be used wholly for charitable purposes.

1969 September – Television news broadcasts moved from the cramped and inadequate facilities at Alexandra Palace to custom-built studios at BBC TV Centre in West London, 8 miles away. The new studios were equipped for colour broadcasts in anticipation of the introduction of colour on BBC1 which started on 15 November 1969.

1980 Haringey Council takes over Alexandra Palace from GLC for £1, with £8.5million dowry for outstanding repair works.
Just six months after the transfer of trusteeship to Haringey Council, on 10th July 1980, the Palace caught fire for the second time. An area comprising the Great Hall, Banqueting Suite, and former roller rink together with the theatre dressing rooms was completely destroyed. Only Palm Court and the area occupied by the BBC escaped damage.

BBC News report on the devistating fire at Alexandra Palace on 10th July 1980. This report was filmed a few days later while Firemen from the London Fire Brigade were still dampening down.

Featured in this video are Leslie Mitchell (senior male television announcer), and a representative from the London Borough of Haringey.

You can clearly see the devistation as a result of the fire, which destroyed the majority of the former Victorian pleasure palace. The theatre and television studios were saved from the fire, although the dressing rooms behind the stage in the theatre were destroyed. At the time of the fire the Open University were still producing television programmes in the studios and the staff were evacuated upon the first sightings of a fire in the great hall. Open University television production was moved to a purpose built complex at Milton Keynes the following year.

This film footage is from the Archive Collection held and administered by the Alexandra Palace Television Society.

For the next five years plans are developed to rebuild the Palace as a state-of-the-art exhibition centre. Rebuilding work commences.

1981 The BBC continued to produce television programmes at Alexandra Palace for the Open University until 1981 when the University moved out to purpose-built premises north of London in Milton Keynes.
Alexandra Palace and Park Charity formally registered.

1986 50th anniversary of BBC Television – celebrations staged in Studio A.

1988 Development and restoration work began soon after and the Palace was re-opened on 17th March 1988. It continues as a Charitable Trust administered by the London Borough of Haringey.

1990 Formation of the Alexandra Palace Television Trust to create a TV Museum.

1996 Dept of National Heritage confers Grade II listed status on Alexandra Palace
Alexandra Palace has built a reputation as one of London’s premier venues. With its beautiful setting with panoramic views of London, stunning architectural features and well proportioned halls, the Palace is now a very popular choice for both corporate and private events.