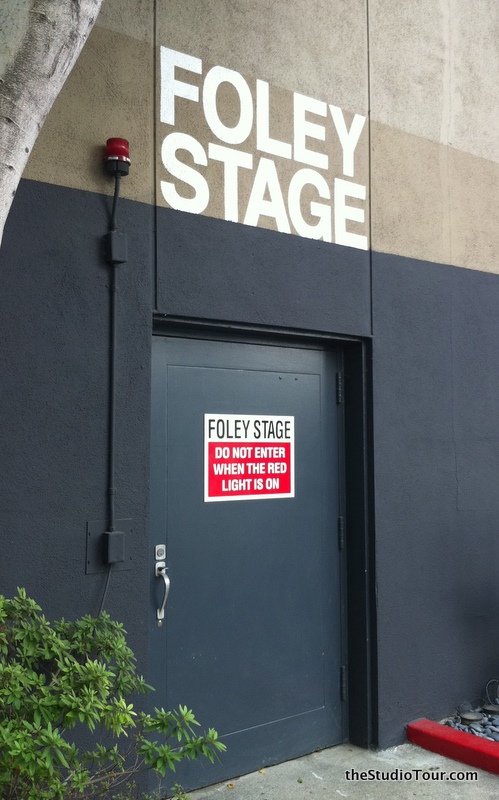 The Foley Stage is used to record sounds that directly relate to actor moves, and have to synchronise exactly with action (e.g. footsteps, fight sounds, falls etc.)

The art of Foley is named after Universal sound technician Jack Foley who, in the very first days of sound at Universal, showed a real talent for creating sounds to be added to Universal’s early movies as they were hastily re-made to add sound where none was originally recorded.

Although dialogue is mostly recorded on set (using highly-directional boom microphones) most of the other sounds that make up the film’s soundtrack are created under very controlled conditions. For example, footsteps on the set might sound wrong because the actors are walking on a hollow wooden platform, not a massive stone structure as the script requires. So, the footsteps are recorded on the Foley stage by highly-skilled performers who watch the footage from the set and time their actions to match the original actor movements exactly. There are a variety of different materials on the floor of the Foley stage which create the sounds of walking in a whole host of different environments (forest floor, snow, gravel, sand, boardwalk etc.).

The job involves much more than footsteps – modern film soundtracks are incredibly dense often involving over 50 individual sounds overlaid to create the audio environment required. Generic background sounds or sounds which don’t need to match action on the set (e.g. phone ring, flowing water, car starting, weather sounds) already exist on a massive library of thousands of sound effects which productions can use.

If there are problems with the on-set recording of an actor’s lines (for example, a plane flies over during a medieval fight scene) the lines can be re-recorded by the original actors (or by voice actors who copy their voices) in the studio, using a process called ADR (Automated Dialogue Replacement) or Looping, where a short section of film is shown over and over so that the actor can time the lines to match the mouth movements made on set.