This man-made lake on the backlot is currently in the process of being removed from the backlot (April 2017). Currently the wildlife around the lake is being examined to find a way to rehouse and rehome the various animals and birds that have made the park their home over the years. 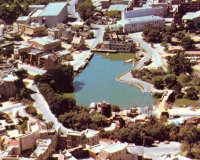 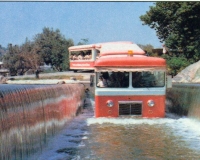 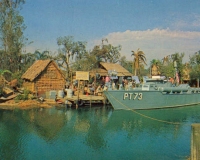 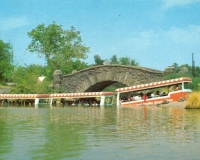 Park Lake is believed to have been constructed in the early 1950s and was one of three bodies of water on the backlot (Falls Lake and Jaws Lake (formerly Singapore Lake) are the others). It consisted of two separate lake areas – the main Park Lake and, the other side of the Sweet Charity Bridge (added in 1969), the Black Lagoon.

Before the Parting of the Red Sea effect was added to the tour in 1973, Park Lake was the site of a recreation of the Mississippi. The riverboat sternwheeler started up and kicked up a fountain of spray. The water of the lake, via a wave-making machine, used to whip up a storm of almost any dimension, gale to hurricane.
The lake was used in The Mississippi Gambler (1953) starring Tyrone Power and also appeared in McHales Navy, Gilligan’s Island, Creature from the Black Lagoon and Dawn of the Dead.

Area beyond the Sweet Charity bridge. The Black Lagoon was part of the tour in the 1960s & 70s when a hidden bridge just under the surface of the water was used to transport GlamorTram guests to the Snow Cottage and Gorilla exhibits (see below). 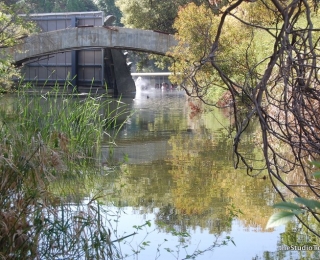 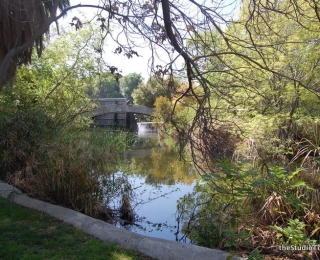 From April 2006 to 2016, the Parting of the Red Sea was taken over to be simply a way of viewing a model ship and scaled-down backdrops from King Kong. Some Tour Guides made no mention of the Red Sea, although many continued to ask the guests to ‘Part the Waters’, to enable the tram to continue onwards.

The “Bigature” of the S.S. Venture approaching Skull Island, as featured in Peter Jackson’s King Kong and now just in front of the bridge over the Red Sea.
With help from the Oscar®-winning artisans of New Zealand’s Weta Workshop Ltd., Studio Tour guests will experience an update of a classic film technique as they pass within a few feet of “King Kong’s” S.S. Venture tramp steamer, an exact replica of the film’s “bigature” prop.
“Bigatures” are large-scale, highly-detailed miniatures which can be filmed at close range and manipulated in ways not possible with full-size props, digital generation or the more commonly used miniatures.  This big-miniature offers the ultimate in realism when combined with traditional and digital effects.
With the movie-making elements properly staged, Studio Tour guests will experience a scene lifted from the blockbuster.  Set against a panoramic backdrop of the primordial environs of Skull Island, they will observe the S.S. Venture as it navigates through a dense marine fog.  The moment will be further punctuated by the deafening, primal roar of “The Eighth Wonder of the World”, Kong.
Behind the scenes, high tech equipment is working  to ensure flawless scenic execution.  To precisely interpret unpredictable weather climate and output consistent and realistic fog, the creative team at Universal Studios Hollywood created breakthrough technology, linking an atomized water system to a newly installed, on-site weather station.  By accurately reading the relative humidity in the air, the creative team was effectively able to produce a high pressure fog system and attain the desired special effect: an impenetrable fog obscured island and a true sense of realism.

Tram On-board Video (2007) featuring footage of Charlton Heston opening the attraction in 1973, and a stunt sequence from The Nude Bomb

The attraction aimed to recreate the epic biblical moment in The Ten Commandments where Moses parts the waters of the Red Sea.

The tour guide points out the fact that Park Lake beside the tram has been used in numerous films and TV series (e.g. Creature from the Black Lagoon, McHale’s Navy) before preparing us for wet feet as we drive through the lake. The guests count down and the waters magically part in front of us. (well, quite noisily actually, revealing an aged rusty metal mechanism).

At it’s best, the effect is very impressive – water cascades past the tram as it sinks below the level of the lake. However, usually the metal plates holding the water back are fairly obvious, and also quite rusty to look at.
The effect was accomplished in Cecil B DeMille’s silent The Ten Commandments (1923) by using a block of blue gelatine melting, projected in reverse.
And they say the camera never lies…

The mechanism was originally a timed effect – the tram only had a certain number of seconds to cross the lake before the mechanism closed up again. Needless to say a tram was trapped once as the lake filled back up again. There are now two safety systems to stop this happening again – the tour guide has to manually push a button to signal all is clear, and there are infra-red sensors which can detect if the tram is clear of the water.
There is still a possibility of some excitement with the Red Sea as the tram roadway sometimes does not drain fully, leaving some guests with wet feet. The tour guide will ask you to lift bags off the floor of the tram for a good reason!

The Parting of the Red Sea effect can be seen in…

This display was at the far end of the black lagoon in the early days of the tour.

The area behind the King Kong Model Ship was the filming location for The Creature from the Black Lagoon. The bridge that’s now too dangerous to cross was built for Sweet Charity.

This bridge was added to Park Lake in 1968 for the production of Sweet Charity. It’s appeared in a number of productions, but is now unfortunately a crumbling concrete shell of it’s former self, behind the Kong ‘bigature’ model ship set. It was built before the Red Sea effect was added to the tour, so the area was very different then. 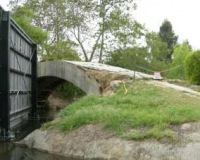